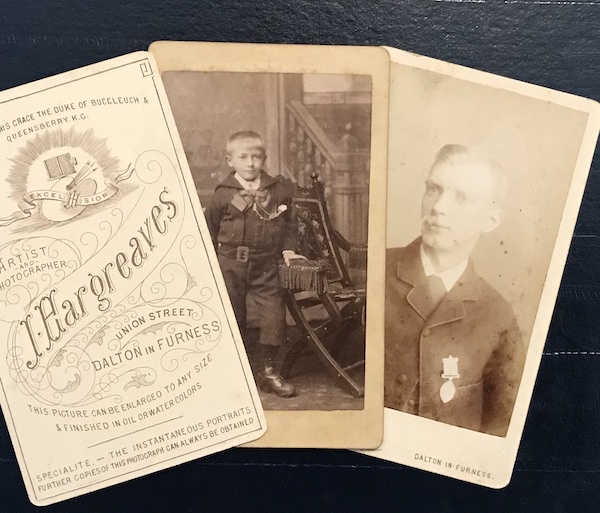 Cartes de visite are both fascinating and sad. Fascinating because they are literally a snapshot of people’s lives (dressed in their ‘Sunday best,’ for the occasion). Sad because you can find them on sale on eBay or at collector fairs – with no idea who those people were. For only a tiny minority of those on sale have a name for the sitter written on them, or a date.

An article on ‘Early years of Barrow photographs’ says James Hargreaves was in Ramsden Square.

The backs of the cartes de visite, however, show him at Union Street, Dalton in Furness.

The cartes de visite also proclaim him to be ‘photographer to His Grace the Duke of Buccleuch and Queensberry KG’.

A search for the duke pulls up Walter Francis Montagu Douglas Scott, 5th Duke of Buccleuch, 7th Duke of Queensberry, KG, PC, FRS, FRSE (born 1806, died 1884). Which helps date the cartes de visite, as do the clothes worn by the sitters. (the National Archives has more advice here).

Who was James Hargreaves?

In 1901, James Hargreaves, photographer, was living in Fair View, Dalton in Furness. Aged 49, and born in Ambleside, he was a photographer – as was his daughter Minnie, 24.

Rewind to 1881, and he was a photographer and artist – in Union Street. Sadly, he was a widower, with children Minnie, John and Gertrude. Though by 1891, he had remarried as he has a wife, Jane King Hargreaves.

He was already a photographer at 19, but living then with his parents in Ambleside. He married Hannah Isabella Royds in Ulverston district in 1875: had he set up in Dalton in Furness and then met Hannah? Or did he open his own studio after marriage?

For sure, he was there in 1877, when he took a photo of the laying of the memorial stones of Newton and Dalton schools, as part of the ceremonies.

James Hargreaves chronicled other events in Dalton in Furness, as well as taking studio portraits: the Dalton Corps in 1881; members of Dalton Choral Society in 1882…

In 1885, he presented a dozen photos as a prize in Dalton Detachment of Rifle Volunteers’ annual shooting contest. He was a colour sergeant in the organisation and presented photos of his company and officers and instructors to them in the same year.

By 1892, James Hargreaves was seeking planning consent to expand the Union Street studio.

He continued to expand, for by 1899, he was James Hargreaves, photographer, Ulverston, Dalton and Millom. That helps date his cartes de visite, as the later ones include the new locations.

In fact, he must have opened his Millom studio before 1884, as a card with ‘Dalton and Millom’ on it still refers to the duke. It also has Masonic symbols in one corner.

A 1901 report on photographer W C Braithwaite, of Ulverston, refers to ‘the Lighthouse Studio, which he shares with Mr Hargreaves, photographer’.

‘Several excellent slides from photographs taken by Mr. J. Hargreaves are being shown this week at the Dalton Picture Palace.’

In that year, he also chronicled the damage done by a lightning strike on the Lancaster Arms beerhouse.

And in 1912, he was still in Union Street for sure, when a presentation was made to the sons of the late William Holmes, who had been manor bailiff to James’ Hargreaves’ old patron, the Duke of Buccleuch. William Holmes’ sons were presented with a framed portrait in oils of their father, and framed photographs – taken by James Hargreaves and funded by the tenants of Earl of Dalkeith’s Furness estate, where William Holmes had lately been the manor bailiff.

In 1917, it seems he took photos that were used in a widow’s claim for damages after her husband was killed on a level crossing.

Meanwhile, in Barrow in Furness…

Another local photographer who produced cartes de visite was the curiously named Shirtcliffe John Priest. Looking into his story uncovered his inadvertent role in conviction a local woman of attempted murder. Which is a post in itself!