The Oxdown Gazette and Non-Advertiser was a short-lived blog that took a side-swipe at current affairs and modern media. It was ‘lost’ when this site had to be re-booted from scratch. And this set-up doesn’t support two posts pages.

So for now, this is really a holding page. 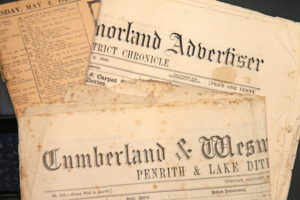 The Carlisle Patriot of December 16, 1843 carried a short item that will resonate with journalists today.

The paper was angry to learn that a Liverpool grocer was renting out newspapers to read, at one penny an hour (then selling them for a halfpenny the following day). The Patriot criticised this ‘dishonest game,’ which of course meant the grocer was raking in money by sharing content that others had created.

The newspaper companies, who had all the outlay involved in staff wages and production costs, would have seen their income fall drastically.

Fast forward to today, when internet giants have all but destroyed local newspapers by effectively doing the same thing.

The Patriot points out it had paid its stamp to the government, and in return had protection and could legally punish those persons who thus trade upon our labours and outlay’.

If only that had applied in this millennium.

I have loads of these: