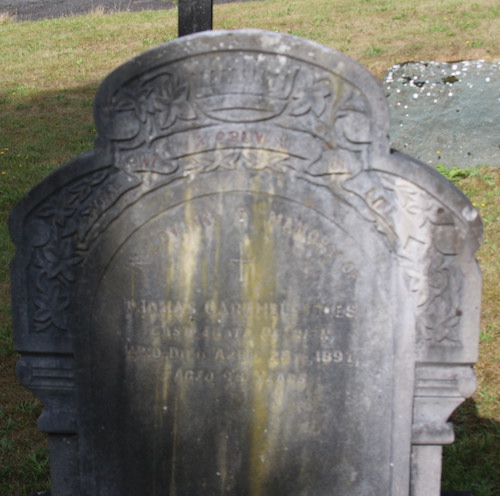 The photos I took at Beacon Edge Cemetery, Penrith, last summer, were pretty random. Just a handful or so between the chapel and my great-great-grandparents’ (side-by-side) graves. Some of them turned out to be Cumbrian Characters. Others seem to have little mark on life.

In the case of Thomas Cartmel Jones, my photo is sadly slightly out of focus.

Thomas Cartmel Jones died on April 28, 1897, aged just 44. His probate record says he was a fishmonger, of 29 Castlegate. Probate to Joseph Simpson Yeates, watchmaker (and the man in charge of the volunteer first aiders and ambulance in Penrith). Effects £1,956.

In fact, he was only a fishmonger for a couple of years.

Thomas Cartmel Jones was born in Wrexham, north Wales, in the September quarter of 1852. His father, Joseph, was from Wrexham but his mother was from Penrith. And by 1861, the family were living in Duke Street, Penrith.

Joseph Jones was a marine store dealer. By 1863, his business was in Stricklandgate. In March 1868, he seems to have been nominated for election to ‘the Board’ (of health). But under the heading ‘Another sudden death,’ in May 1869, it was reported that Joseph Jones had died suddenly at home, having seemed in his usual health the day before.

Thomas’ mother Ann took over the business. The 1871 census shows her at 80 Strickland Gate, with sons Thomas, 18, her assistant, and younger sons Joseph 16, born Penrith, John 11, and a general servant.

Ann Jones found herself before the magistrates in 1873, charged with buying old lead. To be precise, some iron railings that had been stolen from Brunswick Square by two boys, James Igo, 10 and John Robertshaw, 12. They’d caused £8 damage and sold the railings to Ann Jones for twopence ha’penny.

It’s telling of the times that Igo ‘had before been convicted of larcency, for which he was flogged’. He was sentenced to three months’ imprisonment with hard labour. Robertshaw was jailed for 14 days.

By 1881, Ann Jones had retired. Thomas Cartmel Jones, at 28, doesn’t look to have found a vocation, while younger brother John, 21, is a tailor. That didn’t change, for 1891 finds Ann and her son Thomas Cartmel Jones together at 24 Duke Street, both living ‘on own means’.

When Ann Jones died, in August 1895, it made the news for a curious reason:

This place has been closed as a burial ground for over 20 years, with the exception of those cases where widows and widowers had the right reserved. Yesterday, the rare occurrence of a funeral was once more seen, the deceased being Mrs. Ann Jones, the wife of Mr. J. Jones, well known at one time as a marine store dealer in Duke-street.

The probate entry for Ann says her executor was Thomas Cartmel Jones, general dealer. Her personal effects would have been worth about £30,000 in today’s prices.

And a few months later, an advert appeared:

1895 Dec 7. THE NEW FISH, GAME, AND POULTRY DEPOT. T. C. JONES, CASTLEGATE, PENRITH, Has always on hand fresh supplies of above, at reasonable prices. Orders promtly attended to, and delivered in any part of the town. Best prices given for all kinds of game.

The following autumn, he was able to advertise:

1896 September T. C. JONES, FISHMONGER & GAME DEALER, 31 CASTLEGATE, PENRITH, Wishes to thank the public for their generous support in the past, and to inform them that he has engaged a fresh Assistant, who will continue the Daily Deliveries throughout the town and district as usual FRESH SUPPLIES OF FISH, RABBITS, DAILY.

However, whether his health was bad, or what, in March 1897 the business was taken over by a man called Frederich Archdekin. Like Thomas Cartmel Jones, he was single. He was still in business as a fishmonger in 1911, for sure.

Thomas Cartmel Jones died within weeks of Frederick Archdekin taking over his business.

This post is one of a series on people buried at Beacon Edge, above Penrith.

Others include publican Thomas Dixon and the local bonesetters, the Dennison family.

And Charles Gilder, a yeast merchant. And William Weight.