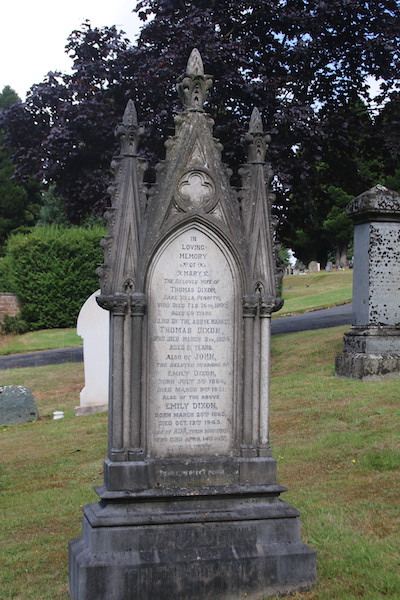 Thomas Dixon, a Penrith publican, and his family

When I last visited Beacon Edge cemetery, Penrith, it was purely to pay my respects to ancestors who are buried there. I would have left it at that, except… I had the feeling somehow that others buried near them wanted me to tell their stories. So I took some photos of other graves. Here is the story from one of them.

Thomas Dixon was born in Kirkoswald: the 1901 census specifies Park Head. It also has him as ‘retired builder’ – and it’s Lake Villa, so the right Thomas for sure. With him are his married daughter Maria Wilson (but not her husband), and an adopted son, William Lee, 7, born Penrith (no birth found).

However, Joseph looks to have done really well for himself:

Ann Nicholson was unmarried, so Thomas’ wife Mary has to have been née Nicholson. There is an 1851 Penrith district possible marriage.

In 1868, Robert Miller advertised his ‘fashionable dancing classes,’ to be held at Mr Thomas Dixon’s Black Lion. Mr Miller also held annual balls at the pub, for his pupils.

The Black Lion was in Cornmarket, part of what is now the Board and Elbow.

There was drama at the Black Lion in 1869, when son Thomas (not named, but ’10 years of age’) slipped and fell on to a four-inch darning needle. A Dr Robertson had to give him chloroform before a Dr Macgregor was able to cut into his leg to remove it.

‘The boy, we are happy to say, is progressing favourably towards recovery’.

In 1878, a number of Penrith publicans announced that from January 1, 1879, they would charge six pence for every horse stabled with them. And that while they would take all care with every horse, carriage, cart, harness or goods left in their charge, they wouldn’t be responsible for any damage or loss.The licensees included James Richardson at the General Wolfe, Robert Graham Pears at the Blue Bell. And Thomas Dixon, at the Black Lion.

In January 1881, the Black Lion was advertised To Let. The Dixons moved to the Station Hotel, in Castlegate. On the 1881 census, Thomas’ place of birth is given as Busk – near to Huddlesceugh Hall and about 3.5 miles from Kirkoswald village.

In 1888, Mary Dixon fell off a ladder while ‘cleaning some carpets on the roof of an outhouse close to Castlefield.. (as you do!)

‘She fell to the ground, a distance of ten feet, breaking her knee cap and severely spraining her arm.

You can read about the Dennison family (also buried at Beacon Edge) and bonesetters in this post.

Thomas had retired by the next census. 1891 finds him and Mary living in Eastlake Cottage, Union Street, Penrith. Which doesn’t exist today, though there is a Union Lane. In 1887, Thomas, while still at the Station Hotel, had advertised To Let a dwelling house in Union Street. It had five bedrooms, so was a sizeable property. And in 1894, Thomas Dixon, ‘Lake Cottage, Union Street’ seconded the nomination of Benjamin Sweeten to be a councillor.

The gravestone tells us Mary died in 1897. Leaving Thomas, who in 1901 was at Lake Villa, Alexandra Road (Union Lane runs off that street), as stated above. Daughter Maria had married miller James Wilson in 1874. In 1891, they were living at Brougham Castle Mill.

John Dixon, on the gravestone, was Thomas’ son. And he seems to have followed his father’s footsteps. For while in 1881, at the Station Hotel with his parents, he was a cabinet maker’s apprentice…. by 1891, he was the Station Hotel innkeeper. Along with wife Emily, four children, and Emily’s unmarried sister Martha Bird. Which gives us Emily’s maiden name.

They were still running the Station Hotel ten years later, the children by now including Ada, then 7, who sadly is named on the gravestone.

John Dixon gave up the pub trade. In 1891, he and Emily (and daughter Lela, a shoe shop book-keeper) are living at 9 Alexandra Road. John’s trade is now florist/market gardener.

When John Dixon died, in March 1931, the Penrith Observer reported:

‘The funeral of Mr. John Dixon, Woodville, Penrith… took place at Penrith Cemetery on Thursday afternoon in the presence of a very large attendance of relatives and friends, the latter including many who are connected with the horticultural affairs of the town and district, with which Mr. Dixon was so keenly interested.

‘was one of the best known horticultural experts in the district, and a very successful exhibitor at Penrith and other shows.

After retiring from business nearly thirty years ago he took up gardening as a hobby, and made adeep study of horticulture, being one of the oldest members of the committee of the Horticultural Society in Penrith. He was particularly interested in the growing of sweet peas, carnations and gladioli, and held the Countess of Lonsdale’s Challenge Cup for three consecutive years, and was the holder for the third consecutive year of the silver trophies given by the Hon. Mrs. Brougham and Lord Brougham & Vaux for carnations and gladioli.

He has also won several medals and silver shields for other flowers, tomatoes and grapes. He is survived by his widow and three daughters. Mr. Dixon was formerly the licensee of the Station Hotel. He was there during the existence of the old premises, and was the first occupier of the new building.’