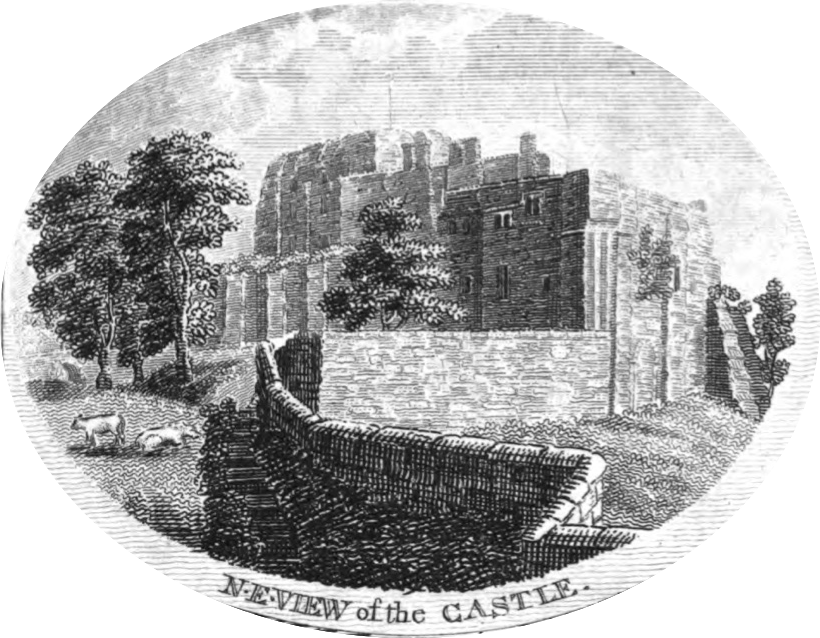 ‘Carlisle 1810’ may sound a random date, but thanks to Jollie’s Cumberland Guide and Directory, we have a good (if partial!) idea of what the city was like then.

The guide, published in two parts by Francis Jollie, was begun in 1810 and completed early in 1811. It is dedicated to Henry Howard, of Corby Castle,

which gets a long and fulsome entry in the guide later. 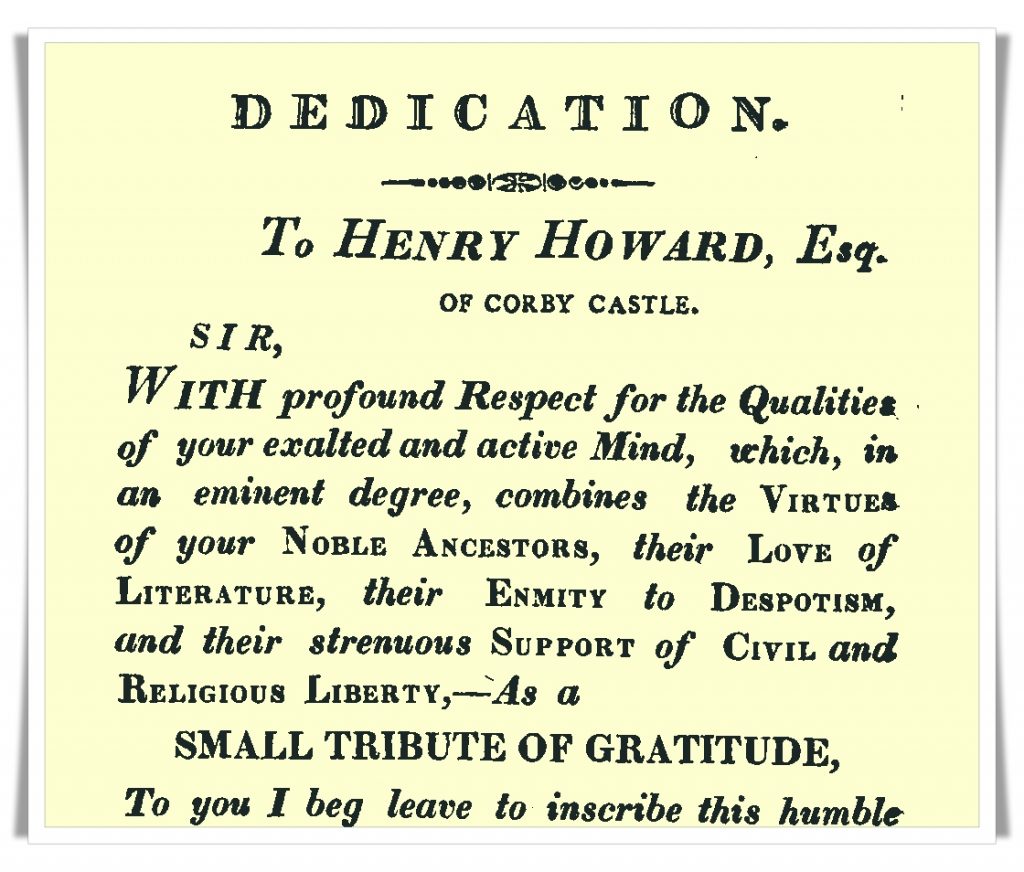 Francis Jollie was a Carlisle printer and stationer (in 1792, for example, he took on an apprentice called Samuel Blaylock).

And in 1798, he founded the Carlisle Journal newspaper. This weekly paper was liberal in its leanings and Francis Jollie’s glowing dedication to Henry Howard could be simply shared political views – though maybe Henry Howard was a financial subscriber as well?

In 1787, ‘Francis Jollie, bookseller, Carlisle’ appears in a London newspaper advert, endorsing Mr Spilsbury’s antiscorbutic drops (you can read what those contained here)

And in 1801, Mr Lignum’s antiscourbutic drops could be purchased, ‘by appointment’ from F Jollie, Carlisle. As could Dr Brodum’s Botanical Syrup and Nervous Cordial.

That would suggest two Francis Jollies trading in Carlisle (one a chemist, or grocer) – were it not for the fact an 1810 advert for Solomon’s Drops (said to cure scurvy – again – but also leprosy and venereal disease) states: ‘sold by F Jollie & Sons, printer of this paper’.

Francis Jollie did still sell books: in 1810, he advertises Solomon’s Guide to Health, and a long list of novels, poetry books, Shakespeare, and other classics, and textbooks on book keeping, geography, law… In 1810, F Jollie & Sons also sold state lottery tickets. And ‘paper hangings’ (ie wallpaper). And German flutes. As you do!

And then on February 23, 1811, the Carlisle Journal announced:

Peasants and poor taste (as per

Even as late as the beginning of the last century, the dwellings were mostly formed of wood, clay and laths; exhibiting marks of poverty and bad taste.

‘Good taste’ probably wasn’t at the forefront of the minds of the poor, in fairness! And Carlisle had  endured centuries of wars and violence. Buildings either needed to be strong, to withstand attack. Or easy and cheap to rebuild if they didn’t.

The directory later says some old clay or mud dwellings still existed in rural parts of the county. Your average rural ‘peasant’ (the directory’s word) lived a two-roomed cottage comprising a kitchen and parlour, the latter serving as the bedroom for all occupants.

But as the prospect of future warfare vanished, trade and manufactures were introduced, began to increase, and an equal augmentation of wealth spirit, and taste for improvement, as well as of population took place.

Present day Carlisle, in the openness of its principal streets, neatness and elegance of its buildings, and the decency and respectability of its inhabitants, is excelled by few if any towns of equal size in Great Britain.

Shops are numerous (many show a degree of taste and elegance), well furnished with every necessary of life, and not a few of its luxuries.

The increase in ‘population, wealth and refinement’ were put down to cotton manufacture, starting with calico in 1761.

By 1810, Carlisle had a ‘commodious flesh market’ in Scotch Street (which is where Francis Jollie’s business was based) and had embraced lighting and flagged footpaths.

One member of the Commission for Lighting and Improving Carlisle in 1810 was a certain Francis Jollie!

It also boasted two public fire engines. But there were also two snags.

Firstly, the engines were locked behind the east walls. A Thomas Thompson kept one set of keys at the Old Turk’s Head, Scotch Street. A James Goodfellow of St Cuthbert’s Lane kept the other.

Secondly, there were no actual firemen to operate them! (You can read more about fire services in Carlisle in this post).

Also lacking in taste and elegance was the county jail: ‘a rather mean edifice, in much need of repair’.

‘Common side prisoners were those without means, who had free accommodation in the prison, that’s generous, and were eligible for a statutory payment of three shillings and sixpence a week, as well as charity payments.’

Master side debtors had to pay rent for their rooms, but got better conditions for it.

Carlisle jail also had two low rooms for male criminals, and two above them for women offenders.

There is no furniture belonging to the prison but what is found by the unfortunate persons confined there, who are allowed merely straw for their beds.

The directory, by the way, said of Penrith: “There are many well-built houses here and the inhabitants are wealthy, courteous and well-bred.”

One up for Penrith!