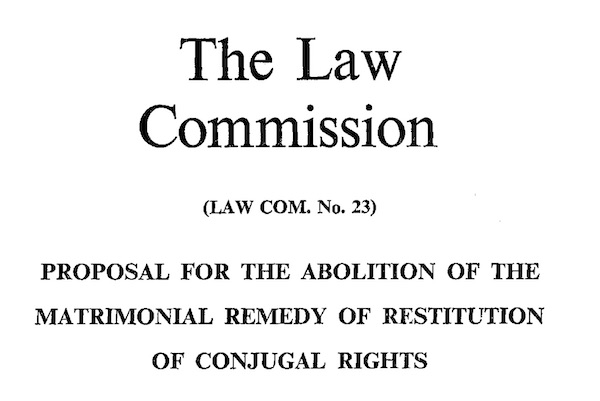 ‘Restitution of conjugal rights’ sounds a strange thing for a deserted wife or husband to seek to obtain from the courts.

But in 1913, when the wife of a Cumbrian war hero petitioned for restitution of conjugal rights, it was the only way of obtaining legal separation.

This post covers both the old law on matrimonial separation, and tells the story of another of the Crackanthorpe family, of Newgiggin Hall.

Restitution of conjugal rights: why it existed

‘Restitution of conjugal rights’ sounds like a person wants an errant spouse to return to him/her as their husband/wife. In fact, until relatively recent times, it was the only way the abandoned person could obtain a judicial separation.

Up until 1813, a spouse who refused to obey an order of restitution of conjugal rights would be excommunicated by the Church.

After 1884, refusing to return to your spouse was no longer punishable by a term in jail. But it was grounds for an immediate decree of separation. The law changed again in 1925, but it wasn’t until 1969 that the Law Commission decided to look into abolishing restitution of conjugal rights as a ‘matrimonial remedy’.

Luckily, the third son of Montague Crackanthorpe (né Cookson) and his wife, Blanche Althea Elizabeth Holt (see previous posts, including this one) was soon after reported to be alive, suffering from a flesh wound to his thigh.

He hoped to soon be fit enough to rejoin his regiment. A wish that led to a report in July 1915 that:

Captain Oliver Crackenthorpe, who was invalided home from the front last month, suffering from gas in the eyes, has rejoined his regiment, the 2nd Border, in Flanders.

Again, he recovered and in January 1916, while with the Royal Scots, he was Mentioned in Despatches, for gallant and distinguished service in the field.

Oliver Montague Crackanthorpe was born on April 22, 1876. In 1881, he was with his parents and older brother Hubert at Rutland Gate, London (middle brother Dayrell was at a college in Margate). Oliver went to Eton, then Trinity College, Cambridge.

He was at Newbiggin Hall with his parents at the time of the 1891 census.

A year later, a concert was held at Newbiggin to raise funds for a reading room. Older brother Dayell Crackenthorpe was applauded for his mandolin solos.

Young Oliver ‘gave a clever exposition of the art of basin spinning’.

He was part of a grouse-shooting party near Shap in August 1893, and performed in a three-handed farcical play at an event staged by his parents in 1895 for tenants, neighbours and friends.

Oliver Crackanthorpe shows up on an Army list in 1902, as a captain, and it is recorded he served with the Border Regiment in the Boer War.

But in 1913, he was described by his wife as ‘of no fixed occupation’.

In 1905, aged 28, he married Dorothy Maud, younger daughter of the late Dudley Bankes de Chair. Oliver’s occupation on the marriage certificate is given as ‘esquire’.

It didn’t work out.

In 1913, Dorothy petitioned ‘for restitution of conjugal rights’. The High Court of Justice ruled in her favour (he hadn’t defended the suit) and ordered him to return home to her, to render to her conjugal rights, and to file a certificate saying he had done so.

So, basically, Dorothy was accusing Oliver of desertion. As outlined above, the suit was the only way to establish desertion and if the deserter didn’t comply with the order, the spouse could obtain an immediate decree of judicial separation.

Oliver Crackanthorpe was also liable for his wife’s court costs.

Oliver Montague Crackanthorpe came out of the First World War with the rank of Major. He died in August 1934, while staying at Newbiggin Hall. Probate puts his relatively modest estate at £1,886, and names his daughter, rather than his second wife Marjorie, whose name appears in his funeral report and also on the 1933 passenger lists, when she and Oliver went to Palma.