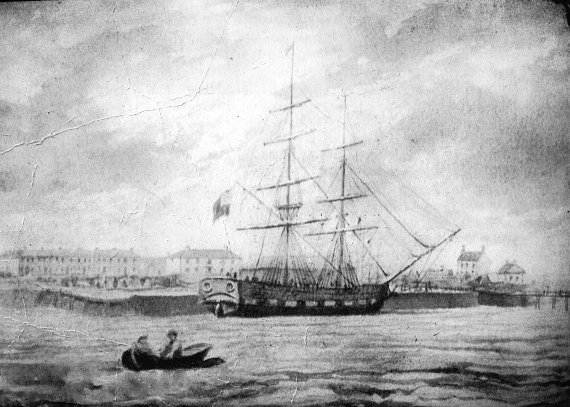 This painting of the brig Robert Burns, at Port Carlisle, is fairly well-known. I suspect most people who are aware of it like it because it shows Port Carlisle in its heyday as a busy port.

The houses and other buildings remain, but there are only remnants and fragments to remind anyone that this now sleepy, tiny village, once had hopes of rivalling Liverpool.

But how many people know (or are interested) in the brig Robert Burns herself? Or realise that she wasn’t ‘just’ some ship that tied up at Port Carlisle one day, or occasionally. She belonged to Port Carlisle.

For when she met her tragic end in the Atlantic, on April 25, 1861, the brig Robert Burns was owned by Port Carlisle ship owner Peter Irving.

Lost – and no one initially knew

‘Everyone’ knows that when the Titanic struck an icebeg late on the night of April 14, 1912, her crew sent out distress messages by wireless.

Half a century earlier (almost to the day) when the brig Robert Burns struck an iceberg, there was no way for the survivors to alert anyone to her/their plight.

Indeed, it wasn’t until May 15 that she reported lost (by Quebec). And it was May 27 before Lloyds List, in the UK, reported: ‘The brig Robert Burns (captain Henderson), from Cardiff to this port (Port Carlisle), is lost in the ice’.

Details of the loss are scarce: she simply struck an iceberg on the Banks of Newfoundland – at 4am on April 25, 1861 – and went down, taking her crew with her.

No time to react

She may have been ‘one of the largest tonnage vessels trading from Cumberland,’ but she went down to the depths in just two minutes. At 4am, most of her crew were likely sleeping, below deck. They wouldn’t have stood a chance.

One newspaper account said she had recently left Silloth with a cargo of salt and was to have returned to Port Carlisle laden with timber. Another said the brig Robert Burns had left Cardiff on April 5 with a cargo of coal for the Montreal Ocean Steam Company. There was even initial confusion as to whether she had been sailing east or west when she struck the iceberg.

As for the crew: it isn’t even clear how many men went down with her. It’s not even reported if she was carrying any passengers.

Drama and a lucky rescue

What is known is that there were two survivors, who had a dramatic story to tell.

On June 4, the Liverpool Mercury reported that two crew had been rescued from floating ice by the barque Symmetry, and had arrived at Liverpool. The report gives the location of the rescue as latitude 48º 21’, longitude -48º 35’.

This image, from searching findlatitudeandlongditude.com shows it was a long way from land. (The blue circle marks the spot).

Nine days later, the Dunfermline Press filled in some of the gaps.

Initially, three of the crew had managed to get to the surface an on to the longboat, which had broken free from the wreck.

She drifted alongside the piece of ice and Captain Robert Henderson directed the other two to jump on it. Before he could follow, the long-boat drifted away. The other two – James Irving, boatswain of Annan, and Alfred Read, able-bodied seaman, could see him for six hours, drifting away. (James Irving was not, that I am aware of, any relation of ship owner Peter Irving).

They were luckily picked up by the Symmetry later that day, but despite cruising around all day, there was no sign of the captain or the long-boat.

No roll of honour

Some of the crew of the brig Robert Burns who perished were subsequently named: Robert Henderson, master, of Annan; William Wilkinson, carpenter, of Harrington; William Smith, cook, of Burgh; Pierre Clouin, a Quebec pilot, sometime resident of Silloth.

‘The rest of the crew are strangers’.