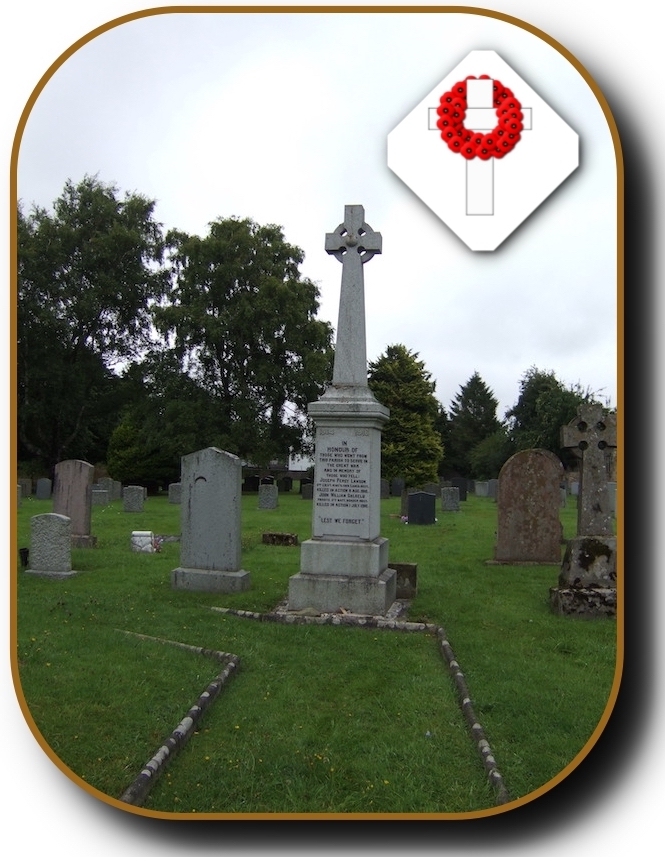 The village of Thursby must have counted itself ‘lucky’ that there are just two names on Thursby war memorial for villagers killed in action in the 1914-1918 Great War (also know as: the First World War, World War One, or simply WWI).

The first name on Thursby war memorial is Joseph Percy Lawson. He survived the start of the Battle of the Somme (see later), but was killed in action just over a month later.

Joseph was working as an insurance clerk in 1911, and living with his his father Robert Lawson, at Curthwaite. Where Robert was the station master.

Joseph had a brother, George St Clair Lawson, then 16 and a clothier’s apprentice. And a sister, Mabel Rissë Lawson, And the family ran to a domestic servant (Isabel Harrison, 21).

The names seem a ‘bit grand’ for even a man like Robert, in a respectable position he’d held at least 20 years (he was station master at Leegate Station, Bromfield, in 1891 and in 1901, when wife Sarah Ann (née Johnston) was still alive).

They’d moved to Curthwaite by 1903 (source: inquest report into an unknown woman found drowned in the Wampool, near Curthwaite Station).

Joseph’s war records don’t seem to have survived. But we know he was an officer (a second lieutenant), and DeRuvigny’s Roll of Honour tells us: he had a grammar school education; joined the Royal Army Medical Corps in December 1914; obtained a commission on the Royal Lancaster Regiment in January 1916, and; was killed during an attack on Guillemont.

Buried ‘between Trônes Wood and Guillement,’ he is now recorded only on the Thiepval Memorial, erected to the memory of ‘the missing’: more than 72,000 officers and men who died in the Somme sector before 20 March 1918 and have no known grave.

His name was also recorded on the Maryport and Carlisle Railway Roll of Honour, while he was still serving with the RAMC.

The Wigton Advertiser adds the information that: he was a parcels clerk at Wigton Station; had been a Sunday school teacher at Thursby; had joined the RAMC ‘being skilled in ambulance work; was promoted to corporal and attached to the dressing station party of the East Lancashire Field Ambulance, and; had been in France about three months.

It also tells us his younger brother, ‘Private C Lawson (King’s Own Scottish Borderers)’ had recently been discharged from the Army after being seriously wounded at Gallipoli. He’d served ‘through the greater part of the Dardanelles campaign’ and in January 1916, was in hospital in Buxton.

This is presumably George St Clair Lawson, but I’ve not found any further details, except he survived the war (by decades) and for sure did serve in the KSOB. His medals record shows he entered the war in the Balkans theatre (fits Gallipoli) in June 1915 and was discharged in June 1916.

Mr, Samuel Salkeld, joiner, Thursby, has received official intimation that his son, Private J. W. Salkeld (Border Regiment), was killed In action on July Ist. Pvt. Salkeld, who was 21 years of age, previously worked with his father as a joiner at Thursby and enlisted in the first few weeks of the war.

The first day of the Somme was the deadliest day in British military history – of the 57,470 British casualties, 19,240 men had been killed.

It turns out he was one of 1,483 casualties buried at Adanac (‘Canada’ backwards!) Military Cemetery, Miraumont. The cemetery was made after the Armistice when graves were brought in from the Canadian battlefields around Courcelette and small cemeteries surrounding Miraumont. John’s war records show he was intially buried at the Ancre British Cemetery, at Beaumont Hamel. Given that still exists, it seems strange he should be exhumed and moved. It must surely have added distress to his family when they were notified, in January 1921.

John William Salkeld was born in Carlisle in the summer of 1895 to Samuel and his wife Mary Elizabeth, née Pickering.

The 1901 census shows them living at The Raffles, Carlisle. John is five, and his sister Sarah four. There are nine other people listed at The Raffles, the head of that family being a joiner and blacksmith

The place name was, of course, given to the (later notorious) Raffles council estate, when it was built in 1926. An old OS map shows a smithy there, which is perhaps what brought Samuel Salkeld (born Holm Cultram) to the then tiny location

1911 saw John William Salkeld living in Thursby with his widowed grandmother Sarah and younger brother Thomas, nine. Sarah got a bit carried away filling in the form, putting their place of birth as: “United Kingdom, Cumberland, Raffles, via Carlisle’. Father Samuel was also living in Thursby, with a ‘new’ wife, Jenny and, and five children (two of them by Mary, who died in Thursby on May 8, 1904, aged 35. Samuel married Jane Thompson a year later).

John William Salkeld  signed up to the Lonsdale Battalion of the Border Regiment just a couple of months after the start of the First World War.

You can read about the battalion here.

A 1919 form filled in by his father shows that by then, John had two brothers and a sister, and seven half brothers and sisters. The youngest was born after John’s death, and some of the others would barely have known their half-brother.

The list of effects returned to his grieving family is basically some cards and correspondance, and two books.