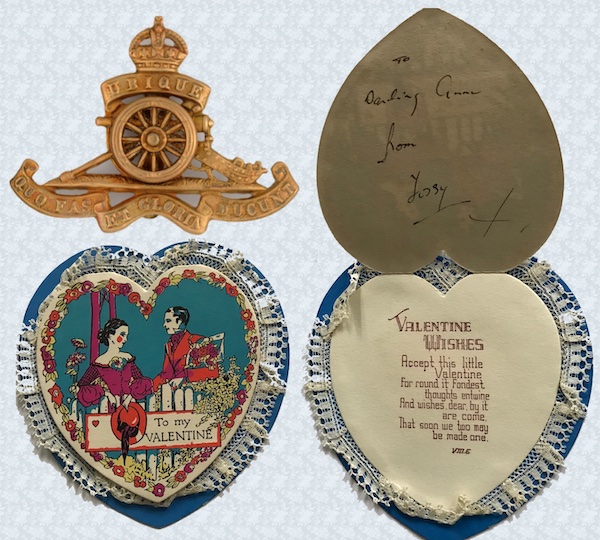 This Remembrance Sunday post is a story of reconciliation, as well as service and the ultimate sacrifice in war.

Ronald Foster was born about 1914, but beyond knowing his parents’ names were James and Mary, of Darlington, County Durham, I’ve not been able to find anything about his early life.

It was possibly in Darlington that he met Annie Williamson. Born and raised on Bull’s Head Farm, Plumpton (Calthwaite), she attended Darlington Training College from 1920-22, where she trained to be a teacher and worked as a teacher in County Durham until 1936, when she became headteacher of an infants school in Peterborough.

Annie Williamson was born in 1901 and however/wherever they met, the age gap between her and Ronald Foster raised a lot of eyebrows.

However, she didn’t let that trouble her and nor did he. The main illustration for this post is a Valentine’s card Ronald Foster sent her in February 1939.

They were married at the end of that year.

The retreat to Dunkirk

When they married, Britain had been at war with Nazi Germany for three months. I don’t know if Ron had already joined the Army, but their time together must have been short.

For by May 1940, he was in action in Belgium with the Royal Artillery, as part of the British Expeditionary Force.

Gunner Ronald Foster served in the Royal Artillery 2nd Battery, 1st Light Anti-Aircraft Regiment. Records of specific aren’t easy to find, so all I know is that he was in a lorry, during the evacuation from Brussels on May 25, 1940, which was machine-gunned from the air.

The story goes that those at one end of the lorry were unhurt; those the other end were killed outright. Ronald Foster was in the middle and badly wounded in the back.

Somehow, his comrades got him back to the UK – one of about 198,000 British and 140,000 French and Belgian troops saved during the Dunkirk evacuation.

A newspaper report says Ron Foster was in hospitals in Sussex and London, before being transferred to the Memorial Hospital, Peterborough, in September 1940.

There he was at least close to his wife Annie, who was able to visit him, until his death, on February 2, 1941.

‘A memorial tree is to be planted in the rose garden where his ashes were scattered.

Wreaths include Mam and Dad, brothers and sisters, nephews and nieces, ‘mother father and sisters, Penrith’ and a few named others.

The ‘Penrith’ wreaths were, of course, from Annie’s parents and sisters, at Bull’s Head Farm.

Rural Cumbria may have had a ‘quiet’ war, compared to many parts of the UK. But it had first-hand experience of a different kind: a prisoner of war camp for captured Italians (initially) then Germans.

Merry Thought prisoner of war camp was built at Calthwaite (the site is now owned by Defra). Prisoners were put to use as workers on local farms. Including Bull’s Head.

At Bull’s Head Farm, John Cookson Williamson and his wife Isabella (Pattinson) were fully behind the British war effort: in 1940, John bought £500 of War Stock – bonds created to fund military operations. £500 in 1940 would be around £28,000 in today’s values. But there was no hatred shown towards the prisoners of war assigned to work on the farm. The rings pictured here were made from silver sixpences by one or more of the prisoners for members of the Williamson family, who accepted and kept the gifts.

Annie Foster was a war widow, who had seen her husband linger in pain hospital for months before succombing to the injury inflicted by a German fighter plane.

And yet… during a visit home,  she befriended one of the German prisoners working on her parents’ farm and got a message to his family, via the Red Cross to say he was alive, and safe.

They stayed in touch ever after.

You can read more about Plumpton in the Second World War, and about the prisoners of war, in this recollection by the late Ella Thwaites, née Richardson, who grew up at Monk’s House Farm.