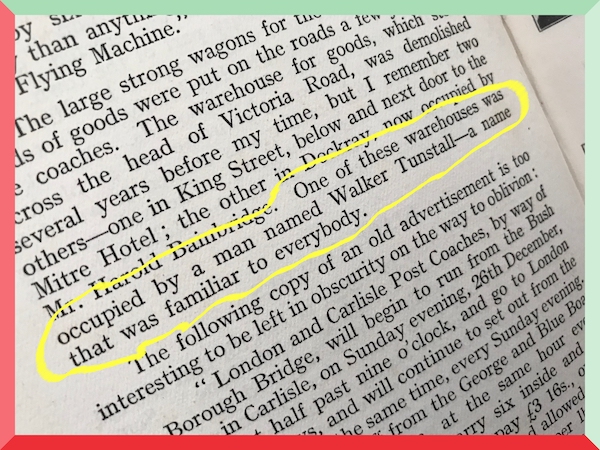 ‘Everyone’ knew Walker Tunstall in Penrith, even long after he died – but this Cumbrian Character didn’t leave much trace of his life for modern readers.

‘It could have been… but wasn’t’

Hard news may be a serious business, but when you are working with horror, misery and tragedy on a daily basis, you lighten it with what may to others seem like gallows humour. And develop a cynicism others may find puzzling or cold.

One source of what could be called ‘amused scorn’ is the non-story. Something that starts out like it is going somewhere, but then doesn’t.

A member of the public is quoted as saying: “If I’d been out there five minutes earlier, I could have been flattened by that falling masonry.”

The journalist’s reaction being: “But you weren’t and you didn’t.”

The quote still gets published, though. And it seems our forebears weren’t adverse to writing ‘if’ stories, either.

On the 30th, an accident occurred at Newbiggin, Penrith, which might have been attended with very serious consequences…

Four carriages containing friends and family were returning from a wedding at Dacre Church, when there was an accident.

The driver was badly hurt, and the parties in the carriage jumped out and several received injuries of so serious a nature that the services of Mr Dennison the bonesetter were needed.

You can read about Mr Dennison the bonesetter in this post.

‘Had the horse not been stopped where it was, it might have run into the other conveyances and mortal injuries might have been the consequence.’

Except it was stopped and no one died.

In March 1861, the Penrith Observer reported that: ‘It might have been worse’. Mrs Thompson, of Edenhall Grange, and the housekeeper of Mr Tinniswood, of Wood Head, were in a ‘conveyance’ that took a bend too fast (or the horse did). The only damage was a few scratches (Mrs Thompson) and a basket of broken eggs.

Getting back to Walker Tunstall

‘A fire broke out at Frenchfield on Sunday afternoon, which might have proved disastrous had prompt action not been taken.’

It was, thanks especially to Mr Walker Tunstall. Disaster averted.

So, who was Walker Tunstall?

Walker Tunstall was a carrier by trade. Born in Kirby Stephen, Westmorland, circa 1809 (the son of Thomas Tunstall and Mary née Walker), he appears on the 1851 census for Dockray as William Walker, 40, alongside his wife Ann, 44, a confectioner born in Penrith, and nephew John Smith, 17, born Penrith, also a carrier.

His name appears (in passing, as having a warehouse) in a rather confusing court case about stolen oats, in 1853.

Two years later, he answered in court for one of his drivers, a George Fearon, who had been summonsed to court for the unlikely ‘offence’ of  ‘sleeping on his cart’. The ‘unlucky wight’ had been seen ‘in the arms of morpheus’ on the cart in Dacre parish.

Husband and wife are still in Dockray (the village) in 1861, but correctly as Walker Tunstall this time.

By 1871, the address is Great Dockray (the street in Penrith) and Walker Tunstall has become a manure agent. And if that doesn’t sound a great career change, then don’t forget the importance of manure to a farming community.

“For many years a carrier from Penrith to Keswick. Greatly respected.”

He also gets a mention in J E Horsley’s 1926 book Old-Time Penrith, talking about warehouses for goods. One, at the head of Victoria Road, had long been demolished. But:

“I remember two others – one in King Street, below and next door to the Mitre Hotel; the other in Dockray, now occupied by Mr Harold Bainbridge. One of these warehouses was occupied by a man named Walker Tunstall – a name that was familiar to everybody.”