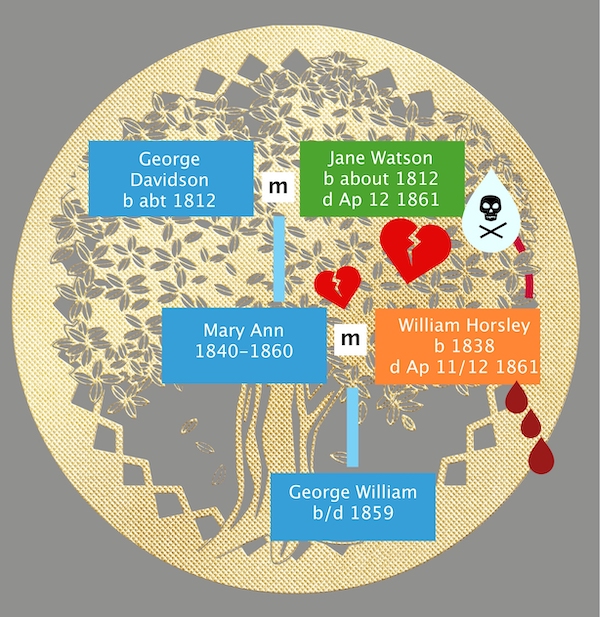 William Horsley of Penrith fell under the spell of his mother-in-law, Jane Davidson. And Jane Davidson was prepared to use magic, and ultimately murder (and a painful death herself) to keep him.

On Friday April 12, 1861, the body of draper’s assistant William Horsley (aged 22) was found on the kitchen floor of the Pack Horse, a small public house in Water Street, Carlisle. His head was on a pillow and a quilt had been placed over him, but he appeared to have been strangled.

The landlady, Jane Davidson, (aged 49) was ill and vomiting throughout the day. As the coroner and inquest jury were viewing the body of William Horsley, Jane Davidson died.

The Pack Horse and the family

Jane Davidson, the landlady, was 49 and married. Her husband George Davidson was an agricultural worker at Scotby and rarely home in Carlisle.

The Davidsons’ daughter Margaret Davidson married William Robinson. They were both living at the Pack Horse at the time of the deaths. William was 22, Margaret 21.

There were only two beds in the Pack Horse. William and Margaret Robinson shared one. Jane Davidson and her two young daughters shared the other.

William Horsley, of Penrith, was also Jane Davidson’s son-in-law. He had married 17-year-old Mary Ann Davidson in March 1858 – and was widowed in January 1860. It seems she had died of consumption about a year after having a baby, George William, who died before her.

William Horsley worked for draper George Hyslop, of Scotch Street, Carlisle, and lodged with him.

It would seem that Jane Davidson had strong romantic feelings for her son-in-law. Who spent at lot of time at the Pack Horse after the death of his wife – sometimes staying there overnight (on the settle downstairs).

But Jane Davidson reportedly feared that William Horsley was seeing another woman his own age. And took action to find out.

She also consulted a fortune-teller. (According to Esther Short) the fortune teller advised Jane Davidson that her husband would soon die and she would be married again. The fortune-teller also told her that if she burned a pennyworth of dragon’s blood (a plant resin) in the fire, it would keep William Horsley from going to the young woman.

William Horsley, not happy at being spied on (and under pressure from his employer) said he was going to the Pack Horse to tell Jane Davidson their ‘connection’ was over.

It was thought that Jane Davidson had killed William Horsley, then taken poison to kill herself.

Examination found a quantity of arsenic in Jane Davidson’s stomach. And William Horsley had died from ‘pressure to the neck’.

Jane Davidson’s daughter Margaret Robinson told the inquest she had heard and seen nothing unusual at all.

Margaret Robinson had got up next morning and carried on life as usual, thinking William Horsley simply asleep – till her husband William Robinson tried to wake him.

George Hyslop said he given William Horsley one month’s notice to quit his job after Jane Davidson kept coming to the shop, and sending messages there.

William Horsley’s father, William Horsley senior, said they had found 37 letters from Jane Davidson in a box, which read more like a woman writing to a boyfriend or lover than to her son-in-law. She is unhappy when he doesn’t visit, or he writes about the weather rather than personal matters. Her spelling is erratic.

One included the line:

In another, she asks for a lock of his hair, ‘to mix with mary ann to put in a brooch’.

Another concludes with lines from a songbook:

Jane Horsley, William’s mother told the inquest the relationship between William Horsley and his mother-in-law began while his wife Mary Ann (Jane D’s daughter) was still alive. Mary Ann had told Jane Horsley she was unhappy about it. And when Jane Horsley confronted her son over it, he said ‘cursed the day’ he’d become part of the Davidson family. He hadn’t denied the relationship, though.

It seems Jane Horsley told her son he should leave Penrith and get work in Carlisle. Only for Jane Davidson to give up her pub in Penrith for the Carlisle Pack Horse.

Another innkeeper, Agnes Rickerby, denied that Jane Davidson and William Horsley had ever stayed the night together at her pub. The coroner threatened to have her prosecuted for perjury.

Jane Docherty, known as ‘Clubby’, also gave evidence. She said Jane Davidson had asked her read the tea leaves in her cup. She (Docherty) had been drunk and told Jane Davidson ‘a romansome story’, ‘for a laugh’. She’d done the same thing again the following day. She denied advising Jane Davidson to put dragon’s blood on the fire – but her evidence was deemed to be less than truthful.

The inquest jury found that Jane Davidson had murdered William Horsley, and then killed herself.

Jane Davidson and William Horsley were buried in Penrith.

‘The ceremony in each case giving rise to an extraordinary manifestation of feeling’.