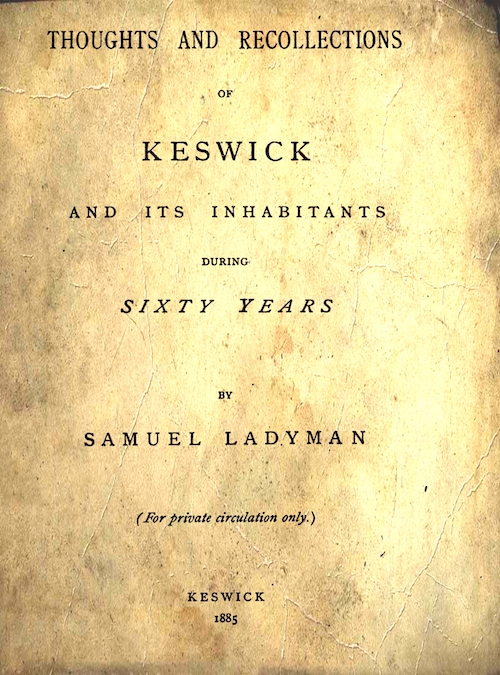 Samuel Ladyman was one of the best-known people in Keswick in his lifetime. Multi-talented and a real philanthropist, he also grew a mean potato!

The name of Samuel Ladyman lives on through his Thoughts and Recollections of Keswick and its Inhabitants during Sixty Years. For despite being published (in 1885) ‘for private circulation only,’ it can still be read today. It is of interest to anyone with Keswick connections. But who was Samuel Ladyman and what makes him a Cumbrian Character?

Samuel Ladyman was born in 1812, son of Thomas Ladyman and his wife Mary Wharton. In Thoughts and Recollections of Keswick, he says:

“I have been in six different businesses – a cabinet maker; an ironmonger; a joiner; a spirit merchant; a pencil maker, and; a butcher.”

He started out as an apprentice joiner and cabinet maker, in the family business. Before taking over from his cousin Joseph Ladyman as a black lead pencil manufacturer.

In November 1853, he was advertising that he’d taken over Samuel Wickham’s business as a wine and spirit merchant.

The anonymous introduction to Thoughts and Recollections of Keswick describes him as:

“A Jack of many trades and master of all.”

Newpaper articles also show he was, at times. a trustee of Keswick Free Grammar School, a church warden, and an elected member of Keswick Board of Health.

A plaque on a drinking fountain in Keswick reads:

One of four erected circa 1875

In Thoughts and Recollections of Keswick, he says:

I placed about five years ago four fountains and sixteen seats at places, with good views of Skiddaw, Druids’ Temple, Watendlath, Bowder Stone, Honister, Buttermere Hawse, on Catbells at the back of the lake, Castlerigg, and elsewhere.

All largely at his own expense, though he was given some contributions towards the cost.

I placed my seat near Grange Bridge, and the fountain near the school at High Hill…  The cost of the lot was £140, out of which £21 8s. 9d. was given me towards the same.

Food for the poor

Samuel Ladyman had been helping poor families in and around Keswick for decades. News articles show that in December 1859 he, ‘as usual,’ provided tickets to butchers to provide meat to 50 poor families in the town and neighbourhood.

He describes in 1885’s Thoughts and Recollections of Keswick how:

On a very hard winter, four years ago, I had six collecting boxes at various places to provide for a soup kitchen.

Many people were generous, but donations included a fake guinea, while someone claimed to have put money in when he hadn’t. And ‘a gentleman’ interruped a woman trying to break into one box.

In Thoughts and Recollections of Keswick, Samuel Ladyman describes giving ‘Mr. and Mrs. John Jenkinson a silver kettle, weighing 74 oz., on their 25th marriage anniversary’. And investing £400 in a field, as a present for a baby god-daughter.

Meanwhile, a news report in May 1863 describes a rifle match at Keswick that took place despite ‘a gale from the north-east’ hindering accuracy.

The disagreeableness of cold and damp were most kindly alleviated by the generous consideration of Mr. Samuel Ladyman, who, keeping with his character as a “jolly good fellow,” surprised the company by driving up a cart-load of sandwiches, bottled beer, bread and cheese, etc, the spontaneous offering of his patriotic and liberal heart.

Poor Isabella followed them to the grave in August 1848, and was buried ‘behind the old Parish Church’.

Samuel married again a year later, to a Mary Wharton (the same as his mother’s maiden name). She was about 39. They were together until February 21, 1863, when Mary died ‘suddenly’ and ‘much-respected,’ aged 55. She was buried at St. John’s Church.

Samuel didn’t remain a widower for long. Eight months later, on October 6, 1863, he married Jane Routledge, described in the newspaper announcement as  ‘niece of Mrs Turner, Derwent Hill, near Keswick. But alas, Jane died in 1869, aged 43. She was buried at Bolton Gate.

They were all three good, faithful, and industrious women!

In September 1864, it was reported how Samuel Ladyman, spirit merchant, Keswick, had cut a single potato into five. He’d bought it while visiting Scotland. He’d planted the pieces in his garden in April last.

These five sets have produced the astonishing number of 106 potatoes, which weigh altogether no less than one stone ten pounds.

Samuel Ladyman wrote in Thoughts and Recollections of Keswick that he had been living for 13 years at Storey’s Hotel, and has been ‘confined to my room a long time through ill-health’. And it was at Storey’s Temperance, Hotel, St. John Street, Keswick, he died later that year – on July 31, 1885.

The English Lakes Visitor reported that there were ‘great demonstrations of respect by relatives and a large gathering of friends and acquaintances’.

Samuel was ‘an estimable and highly respected townsman’ and ‘a man of a liberal and considerate disposition’.

He was ‘constantly giving his aid in all matters promoting the welfare of the town, and in assisting really needy persons’.

‘His decease will be regretted by all who knew his kindly and genial disposition, which was combined with great simplicity, sincerity, and openness of character.’