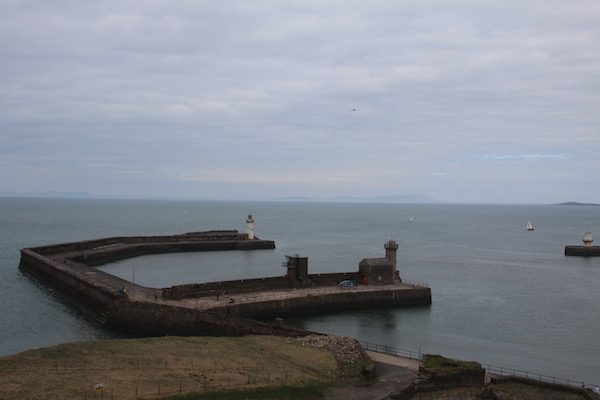 So this post is a look back at previous winter storms, flooding, damage and dramatic rescues. And of course, some Cumbrian Characters.

visited by one of the most tremendous storms and floods remembered by the eldest person living.

The winter was remarkable for hurricanes and heavy rains, as well as for mildness of temperature.

The river Eden was never known to be so high as on the 3rd of February 1822 – it was even more than a foot higher than in the great flood in 1771.

Many cellars, and ground floors of the houses in the lower parts of Rickergate, were completely filled with water and the inmates obliged to ascend to the upper storeys to escape the flooding.

The provisions, goods of various kinds, clothes and furniture, were either spoiled, destroyed or sustained considerable damage.

Several parts of the city and neighbourhood received great injury by the violence of the wind.

Happily, no lives were lost and kind folk rallied round to help the victims, with donations of coal, peat, money and clothing.

On the night of January 13, 1827, Whitehaven was ‘visited by one of the most furious tempests known there for the last thirty years’. Several houses lost chimneys, slates, etc and there was flooding in cellars.

The following day was an anxious one as a number of vessels struggled to gain the harbour from the sea.

Most made it in safely, but there was drama for the Jane and Mary, which was driven upon an abutment and large stones and broke up.

At the distance of a mile from the harbour, the spray, driven by the hurricane, fell like a heavy shower of rain.

People on shore were able to throw a rope on board. And one by one, those on board had the rope tied round their waist and were dragged through the waves to the shore.

First to be rescued was a young woman passenger ‘named Gird’, who had been in bed when the vessel struck. She had rushed up to the deck in her nightclothes. The mate wrapped her in his jacket before tying the rope round her.

Soon after the last of the crew was safely ashore, the ‘devoted vessel broke in a thousand pieces’.

A number of vessels in the north and south harbours suffered varying degrees of damage, from being driven into each other or breaking from their moorings. The piers and quays got off with surprisingly little damage.

Disaster averted – by a dentist

Lamps were destroyed, the hot-bath house lost a chunk of its roof, and ‘every street and lane was strewed with fragments of broken chimney pots, slates and roughcast’.

One of the houses damaged belonged to a Mrs Gunson. The chimney of her house crashed partly into a room below about 5am. Luckily, no one was in it at the time. The house was divided into apartments, whose occupants gave the alarm. Neighbours rushed to help

The weight of bricks upon the roof was gradually pressing the walls outwards. They would certainly have fallen had they not been quickly propped under the direction of Mr Sheffield, by whose advice also the bricks were as promptly removed, averting further destruction.

Was the wise Mr Sheffield a builder by trade? No, he was a dentist.

Thomas Sheffield, dentist, advertised in the Cumberland Pacquet in 1825, saying he’d be at the Black Lion Inn, Whitehaven, for a few days. Dentists in those days did travel around, setting up temporary practice in rented rooms.

His base and main practice was in Abbey Street, Carlisle – where he had bought ‘a large and commodious house’ in 1826, equipped with stock and materials from London. Born about 1785, Thomas Sheffield can be found on the 1841 census in Carlisle, still in Abbey Street, with wife Esther (née Fleming), several adult children, a grandson, and a domestic servant.

In 1833, ahead of another visit to Whitehaven, the Pacquet referred to him as: ‘the celebrated dentist’ who was ‘too well known throughout the district to require a single line of eulogium at our hands’.

Thomas Sheffield wasn’t the only cool head in his family. In June 1832, ‘a son of Thomas Sheffield, dentist’ spotted a boy aged about 11 in difficulties in the river Eden. He’d been swimming with friends, got out of his depth, and sunk. The unnamed Sheffield (‘about 16 years of age) plunged in and saved the child ‘from a watery grave’. From his age, the teenage hero could have been Isaac Sheffield, who was baptised in Dalston in 1816.

Not long after, Thomas Sheffield recited some verses of his own composition at a big event in Carlisle celebrating the passing of the Reform Bill – which brought in major changes to the electoral system in England and Wales

A noble victory’s been achiev’d

No fathers of their sons bereav’d

No sons their sires bemoan, Sir…

Well, respected dentist and among the heroes of the 1827 Whitehaven storm, we’ll cut him some slack on the poetry!