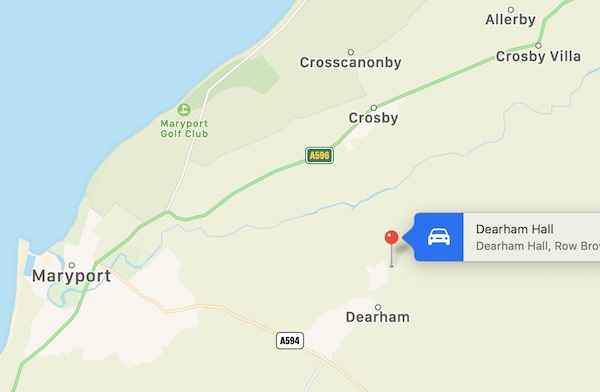 The Dearham Riot of August 4, 1863 doesn’t occupy much, if any space in history books. For which reason, it seems a topic worthy of some space on Cumbrian Characters.

If the idea of the village of Dearham having a riot seems improbable, it had by then expanded from a rural community to a coal mining community. And as my post on Cumbrian wedding invitations records, the residents weren’t all model members of society!

The Dearham riot pre-dates the wedding story by 30 years, and begins with a court case over a right of way.

The really not-so-great trial was a dispute over access between Dearham and Crosby. The land was owned by Mr Dykes*, but farmed by Mrs Elizabeth Blackstock, of Dearham Hall.

The road had been used for a long period by miners, as a short-cut to get to/from Crosby Pit and their homes.

Mrs Blackstock, who was 84, had long complained of damage and loss from what she considered to be trespass. And took an action against a Mr Harrison Thompson, to settle the question.

Harrison Thompson**, a miner who lived at Dearham Row, seems to have been a ‘test’ of whether it was a right of way or not. Why he was singled out is probably something he wondered himself!

A special jury at Carlisle Assizes decided, after a two-day hearing, that it was not a public right of way. The court had heard a succession of 18 local people say they’d used it as a right of way for years, without anyone objecting. Other witnesses said they’d been refused access along it.

Elizabeth Blackstock’s son John Blackstock, of Hayton Castle, had managed the farm for her since 1833 – and said he’d put ‘keep out’ notices on the disputed road. He’d done this because of people ‘pillaging turnips’ and damaging fences.

The special jury was composed of land-owners, and those on the losing side of the argument felt the jurors were therefore less than sympathetic to their case from the start.

The Maryport Advertiser of August 7, 1863, reported:

On the litigants arriving at Dearham station on Tuesday night, they were met by a crowd of persons estimated at between 200 and 300, principally from about Dearham, and they proceeded in a body to the village, where a tremendous riot soon commenced, and a work of destruction which it was painful to witness.

And some of them received injuries.

Seven men were arrested and locked up overnight. They and six others were brought before a special hearing of magistrates the following morning. The defence sought time to prepare, and the hearing was postponed 24 hours.

James Rogerson, a master builder, said he been at the road case hearing (but not called as a witness). He’d been followed from Dearham station by a crowd throwing sods and stones. Covered in mud, and with his hat knocked off, he’d sheltered for ten minutes in the Globe Inn, then gone home, where stones were thrown at his house, breaking five panes of glass.

Thomas Dawson said he’d been pelted with sods and stones. His wife Martha said two windows had been broken and someone had threatened to pull her out of the house and “give me what I wanted.”

Richard Graham said people had thrown stones at his door – and at him, when he’d gone out and faced the crowd. The mob had broken 40 panes of glass out of 48 in his windows, and one stone had hit his wife on the forehead.

PC William Oldcorn said he had tried to disperse the crowd, but couldn’t. He’d seen John Sinclair exciting the mob, and offering to fight Rogerson’s son. He’d later seen the crowd at Robert Pattinson’s house, where stones were thrown and windows broken. Thomas Cameron had told the crowd to go into the house and help themselves to Mr Pattinson’s drink. He’d heard someone in the crowd say that if it had been dark that night, the men (the court case witnesses) would not have got home that night.

The bench agreed there was proof of a riot. Margaret Elliot was discharged. And the prosecution declined to press charges against Jane Donald ‘in consideration of her large family’, despite there being evidence against her. Sarah Bell was discharged after further evidence. The remaining ten were committed for trial and bailed.

The Advertiser, by the way, felt sorry for the rioters and suggested Mr Dykes* the land owner might like to intercede for them and offer to pay for the damage they had caused by their ‘headstrong passion’.

One can only imagine what Mr Dykes thought if he read that! However, when it came to the full hearing, at the end of October 1863, the Advertiser claimed that Mr Dykes had suggest the matter might be dealt with more leniently than using the Riot Act.

Whether he became involved or not, for sure the ten defendants pleaded guilty to rioting. After which the prosecution withdrew the charge, requiring them instead to bound over to keep the peace for 12 months.

Few of the 1863 protagonists show on the 1871 census. It must have been hard for rioters and victims to live side by side after the events of that summer’s night.

James Rogerson certainly wasn’t happy. For in October 1863, a week or so before the court hearing, he put his house and shop at Dearham (together with six recently built houses) up for sale by auction.

*Mr Dykes the landowner. This was Frecheville Lawson Ballantine Dykes, of Dovenby Hall.

**Harrison Thompson, the miner singled out in the road case, died in 1892, still living at Dearham Row.

His effects were then worth £21.