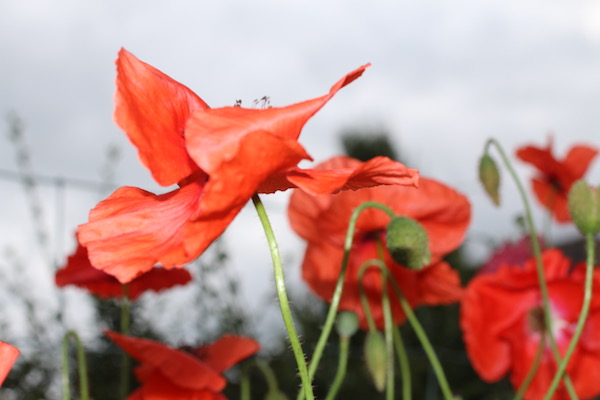 High Hesket war memorial is just one of  countless (or uncounted) such memorials across the length and breadth of the UK. Every name on every memorial has a story behind it, of a life lived and a life lost.

Today is Remembrance Sunday, ahead of Remembrance Day on November 11. The following is a look at the names that appear on the war memorial at St Mary’s Church, in the village of High Hesket, Cumbria. These are First World War deaths only.

His mother Mary died when he was just four, and he grew up in High Hesket with his father (another Joseph) and step-mother Mary.

On April 10, 1917, he suffered gun shot wounds to his back and neck. He died from the wounds three days later at 43 Clearing Station France, from wounds and was buried at Warlingcourt Halte British Cemetery, Saulty (VIII. D. 12).

That section, and others, was filled in April/May 1917 by clearing station deaths from the Battle of Arras – a battle which resulted in stalemate, at the cost of 158,000 British casualties, and;130,000 German casualties. 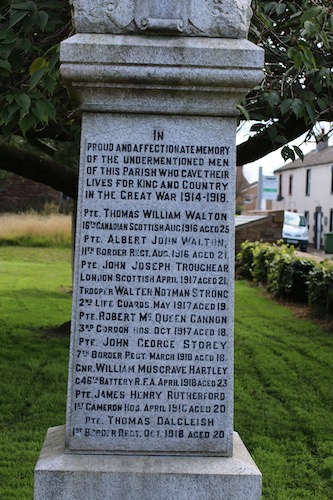 Albert John Walton was one of the eleven children of railway labourer Robert Walton and his wife Mary Ann.

He was farm servant when he signed up on November 7, 1914. aged 19. He was 5ft 8ins. had brown eyes, fair hair, a ruddy complexion, and had scars on the right side of his neck.

His record only shows his 1914-15 Star, British War Medal and Victory Medal were signed for by his father Robert Walton of Barrow Hill, Southwaite. Along with his personal effects: letters, photos, prayer book, New Testament, tobacco tin, a belt and other bits and pieces.

Albert’s brother Thomas William Walton is also on the High Hesket memorial – he died in the same month as Albert, aged 25, but was serving with the 16th Canadian Scottish

Thomas William Walton was a horseman working on a farm at Armathwaite in 1911. At some point between then and 1916, he has to have emigrated to Canada.

MEMORIAL SERVICE TO HIGH HESKET SOLDIERS. A memorial service was held in Hesket Church for two young men of the parish who have given their lives for their country—Private Thomas W. Walton. Canadian Scottish, and Private Albert John Walton, Border Regiment, sons of Mr. R. Walton. Barrow Mill. The service was conducted by the vicar, who took for his text ‘Vacant Places’ — and preached a very impressive sermon. A large number of the deceaseds’ relatives and friends were present.

CRUMP TRENCH BRITISH CEMETERY, FAMPOUX. This was made by fighting units between April and August 1917. After the Armistice, 85 of the graves were found to have been destroyed.

Walter was the son of Joseph Strong , a gardener and farmer, and his wife Hannah, née Notman, who had two sons and daughter. And that’s about all the information that is readily available.

Sadly, I couldn’t find any information on him.

William Musgrave Hartley was a railway porter, born about 1895 – one of four children of railway surfaceman John Hartley and his wife Dinah, née Musgrave.

Sadly, I again couldn’t find any information on him.

Private James Henry Rutherford, of the Cameron Highlanders, Hesket, was killed in action on the 18th. He was a goods clerk at Staveley.

The 1911 census shows Walter Dalgliesh, alabaster mines labourer, wife Elizabeth, had had six children, two of whom had already died. Tom and two girls are on the census with them.