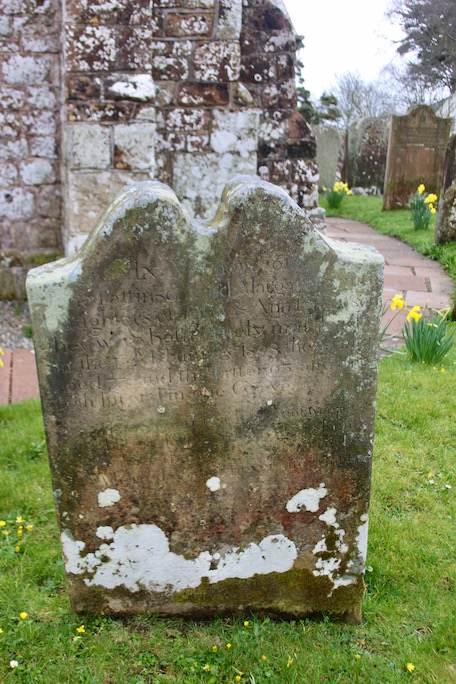 The Longburn murders of 1808 rocked Cumberland and beyond, for the way a man shown kindness ‘repaid’ it with brutality against two defenceless victims.

A gravestone near the door into St Michael’s Church Bowness-on-Solway has a surprise in store for anyone glancing at it expecting the usual ‘name, died, husband of’ details. For Bowness seems an unlikely spot for two elderly women to have been ‘cruelly murdered’.

In fact, Margaret Smith and Jane Pattinson weren’t living in the parish in 1808 at all. But then the place they were so heartlessly bludgeoned was hardly a hotbed of violence either.

The gravestone (pictured above) records:

Jane Pattinson and Margaret Smith, daughters of John and Ann Pattinson, cruely (sic) murdered on the 1- of January, 1808. The former aged 73 years and the latter 63 years and both lie in one grave…

I couldn’t read the rest.

On the other side of the headstone:

The sisters’ local parish would presumably have been Bromfield. For Margaret Smith and Jane Pattinson were murdered at Longburn, an isolated farm, kind of roughly in the middle of a triangle between Bromfield, Abbey Town and Dundraw.

Who were the Longburn victims?

The grave says they were the daughters of John and Ann Pattinson (as Jane remained). Margaret Smith’s husband says Margaret’s maiden name initials were M P.

What is clear is that Jane Pattinson lived with her sister Margaret and her husband, weaver and farmer Thomas Smith.

Tuesday, January 19, 1808 dawned a perfectly normal day at Longburn. Thomas Smith visited Wigton Market, as he’d have done so many times before.

His wife and her sister stayed at home. As did James Wood, aged 18/19, who had been working at – and boarding at – the farm since Martinmas (November).

His business finished, he returned to the most terrible and astonishing shock. His wife and sister lay battered, bloody, and with ‘the ebb of life fast setting’ (as the Carlisle Journal put it).

Margaret Smith lay in the barn, Jane Pattinson in the kitchen.

The story made newspapers across the country, with some filling in details of this ‘most atrocious deed’ committed ‘at Longburn, in a solitary dwelling about four miles from Wigton’

‘The like cannot be remembered to have happened in the county by the oldest person living in Cumberland.’

It was an easy crime to solve, however. For a box had been broken into and about £10 stolen.

And James Wood was missing.

Considering the area, it’s impressive that searchers caught him the following day – he’d crossed into Scotland and was on the road from Annan to Dumfries, about four or five miles from Annan, when a Mr Topping of Bowness-on-Solway apprehended him.

An account of the court hearing, however, says it was a John Bell (a relative of Margaret Smith) who had caught up with James Wood, at Cummertees.

James Wood appeared before Annan Magistrates. They sent him back to Cumbria, and he was held in Carlisle Gaol.

Further details emerged. He had attacked Margaret Smith, while she was lifting hay in the barn, beating her ‘unmercifully’ with a flail. He’d then gone into the house and attacked Jane Pattinson with a billhook, severing one or more fingers from the hand she put up to defend herself from the blows rained on her head.

Margaret Smith was 73, Jane Pattinson was 63, so why James Wood used such terrible force – or indeed any force at all – is hard to imagine. They would have been little or no match for a fit teenager had he simply smashed the cash box open and taken the money. Unless he thought he’d gain himself a few hours to get clear away by killing them.

Who was the Longburn killer?

Other than his age, what do we know of James Wood? He was said to have been apprenticed to a weaver in Carlisle, and to be ‘from the neighbourhood’. He was also said to have been a deserter from both the Army AND the Navy – for sure, he had told Thomas Smith he’d been press-ganged on board a man of war (ship), and had deserted.

Thomas Smith was a weaver by trade, as well as running a small farm. James Wood had turned up at the farm at Martinmas, 1807, when he was at Wigton market. Margaret Smith and Jane Pattinson had encouraged him to wait till Thomas got home. Thomas had then engaged James Wood to work for him, as a weaver. When he chose to work, he could make about 15 shillings, but he rarely made more than seven, which the cost of his board.

Thomas Smith had got home that terrible day, surprised to see the cattle still in the yard. He’d then gone into the house, and found Jane Pattinson lying with her head on the table.

In poor light, he’d not realised she was badly hurt, and had gone out and seen to the cattle, before coming back in, lighting a candle, and seeing the pool of blood.

He’d then gone looking for his wife, and found her lying in the barn, again in a pool of blood. The two women were still alive, just, but unable to speak. A local surgeon who got to Longburn shortly after Margaret Smith died said any one of the wounds to her head would have been sufficient to kill her.

Thomas Smith said he was from Ireland, but had lived 30 years in his wife’s family – 14 as a servant with his wife’s brother, and 16 as her husband. So they’d married when Margaret was 46- 47. The women had largely managed the farm, and he the weaving.

James Wood admitted the murders after being arrested and was convicted by a jury in a matter of minutes at Carlisle Assizes in August 1808. He said nothing in court in his defence.

He was executed on August 25, which punishment he was said to have ‘suffered with great composure and resignation. His body was ‘delivered to the surgeons for dissection’.