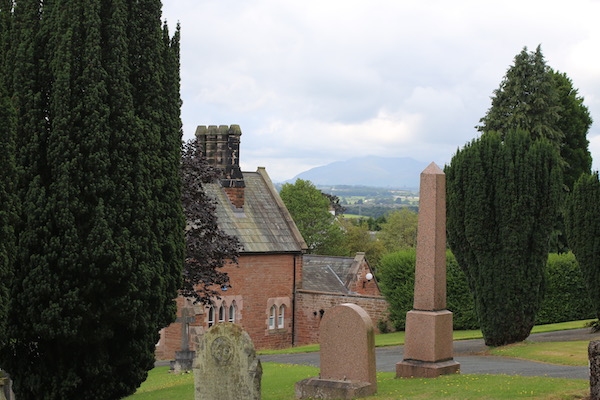 ‘The Penrith death roll for 1895’ sounds a dry title, but it has some interesting facts and figures. And led Cumbrian Characters to discover a tale of broken hearts, one of late love, and one of terrible tragedy.

PENRITH DEATH ROLL FOR 1895. In accordance with their usual custom’, the Cumberland & Westmorland Herald, of December 28, 1895, gave the annual return of persons buried in the Penrith Cemetery.

One quarter were infants

Of 1895’s burials, 49 people were aged 70+ (12 of them over 80). There were 45 infants aged under 5. That’s roughly 26 per cent, just over a quarter of all burials, were under five years old. There were ‘just’ eight children died between the ages of 6-10, showing early childhood really was the riskiest time.

Deaths from broken hearts in Threlkeld

The Penrith death roll, of course, only covered those buried in Penrith Cemetery. It doesn’t include the names of three siblings who died in Threlkeld: two of them on Christmas Day 1895. As recorded in the same edition of the Herald.

Sarah Hodgson and Elizabeth Hodgson had both been ‘in delicate health, but able to continue their household duties’ until it became clear that their brother John Hodgson ‘had but a short time to live’.

At this point, the sisters ‘entirely broke down and sank, death coming to each on the morning of Christmas Day.’

The report says ‘never having married, they had always lived together’. Which is not quite born out by the census. In 1881, in Threlkeld village, Sarah was housekeeper to her brother John, a joiner. And another unmarried brother, William (45) was living with them. But Elizabeth wasn’t with them. Nor had she been in 1871.

And rewind to 1861, and John, William, Sarah – and another sister, Margaret – were with their parents (Thomas and Elizabeth). But still no sister Elizabeth.

In fact, in 1851, Elizabeth was a domestic servant in Crosthwaite; in 1871, she was a housemaid in Grasmere. And in 1881, she was a ‘porter, late cook’, living with her married sister Margaret, now Margaret Herbert.

While the Herald’s story, therefore, isn’t strictly accurate, it does make you wonder what the three siblings actually died of: presumably it is correct that the sisters both died on Christmas Day?

Though maybe it is nicer to leave it as it stands: that they effectively died of broken hearts after losing their brother.

And back to The Penrith death roll… what of Grace Halliday, who had the ‘honour’ of being the oldest person buried in Penrith Cemetery in 1895? Well, in 1891, she was living in Brougham Villa, Penrith, ‘living on own means’. Place of birth: Tordoff, Scotland. She was née Grace Wishart (she married Matthew Halliday in 1839) and had a Wishart niece and nephew living with her. Matthew was also a Scot, so how/when she came to live in Penrith is unclear.

Given Grace wasn’t a ‘Cumbrian Character,’ how about the holder of the 1894 ‘record’: Jane Todd, who’d been 88 when she died?

A missing husband – and a late love

In 1891, Jane Todd shows as having been born in Patterdale, Westmorland. And had a granddaughter, Beatrice Jackson (draper’s shopwoman) aged 20, living with her.

Jane Todd was the widow of auctioneer Isaac Todd. She was already (supposedly) a widowed Mrs Irving when they married in 1854. In 1851, Jane had been making ends meet, and bringing up five daughters, by working as a char woman. She is listed as sole parent at the 1841 baptism of daughters Rebecca and Ann Irving…. and at the baptism of Jane Irving in 1845. And 1851 shows another daughter, Elizabeth Irving, aged 2.

So, one has to wonder if there ever WAS a ‘Mr Irving’.

Isaac Todd died in 1872. In 1851, aged 49, he was single and living with his parents, in Townhead, Penrith. (As was his future bride and her daughters). Whoever the father was (fathers were?) of Jane’s daughters, he took them on as his family. For on 1871, Elizabeth Irving is listed as Elizabeth Todd.

There is a tragedy on the Irving/Todd family tree. One of the twins, Anne Irving Todd, married a master mariner called Thomas Jackson in 1870: hence Jane’s granddaughter Beatrice Jackson, on the 1891 census.

Two other children followed, the last being Rebecca Jane Jackson, born 1877. In June 1881, little Rebecca was found dead on a bed, at their home in Toxteth, Liverpool. She had been strangled by her mother (with a pair of garters) while Thomas and their eight-year-old son, also Thomas, had been away at sea for ten months. Annie Jackson said she had done it ‘to save her soul’. The well-respected Annie Jackson was suffering under a delusion, the result of a religious mania.

Annie Jackson was found not guilty of murder, on grounds of insanity. On being taken out of court, in February 1872, she called out: “I have made my home a wreck and my husband miserable.”

The Herald reported the case, calling her ‘Annie Jackson, wife of a master mariner, (and daughter of the late Mr. Isaac Todd, auctioneer, Penrith’. Annie was transferred from Whittingham asylum (where she had been from her arrest to the trial) to Broadmoor. She was discharged from there in 1906, but readmitted and shows as ‘AJ’ there on the 1911 census.