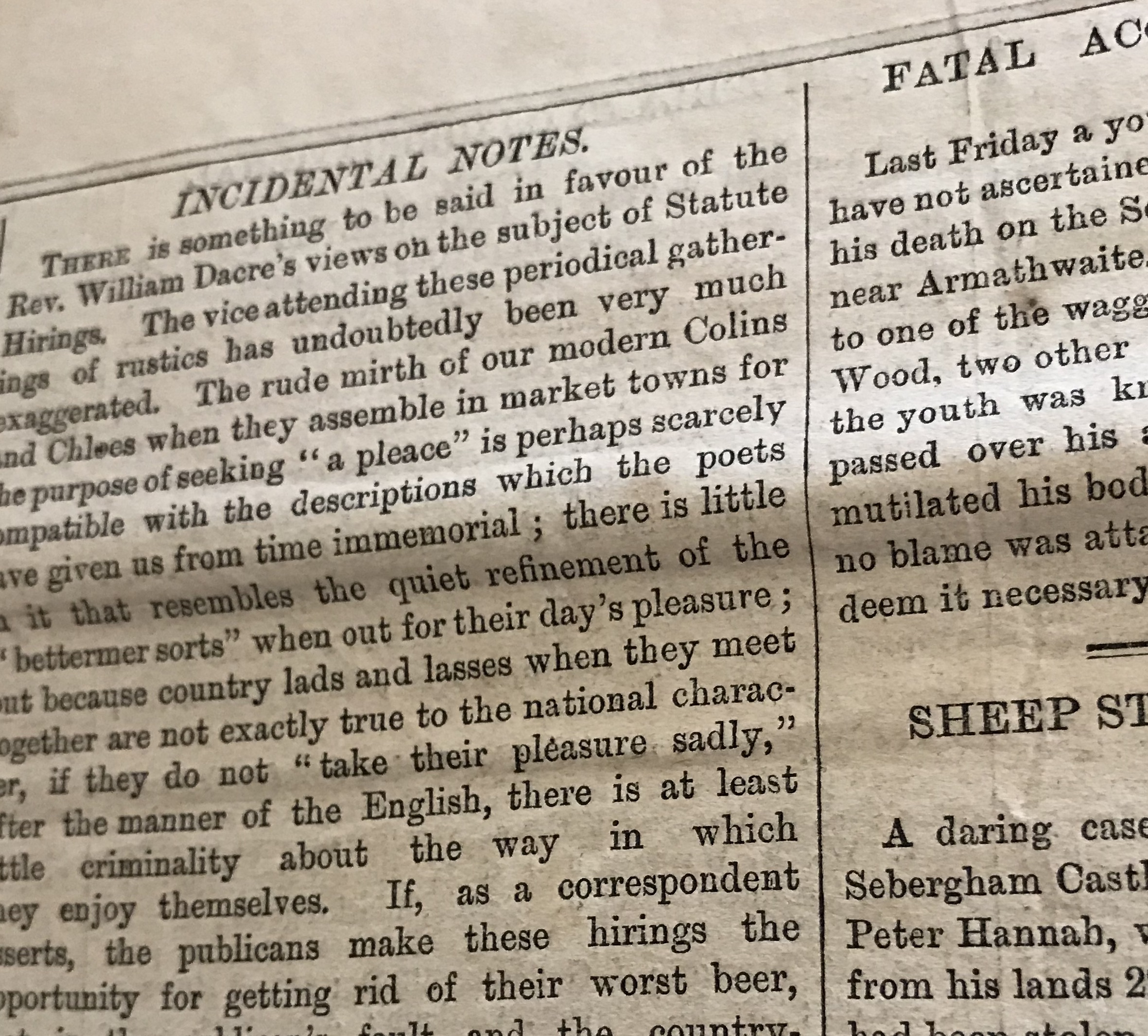 William Dacre, the vicar of Irthington, featured in my post on Cumbrian wedding invitations, because of his not-unreasonable objection to being barred from his own church.

What started as a quick check to find who ‘Mr Dacre the vicar’ was uncovered a life that began in India, thanks to a father he never knew.

But with a name like Dacre, it’s no surprise he was of Cumbrian ‘stock’.

He was in the East India Company. In 1816, he was appointed Acting Judge and Magistrate of the zillah (sub-division) of Chittore.

His background, however, was as part of Cumbrian landed gentry: the Appleby-Dacres of Kirklinton Hall.

You can read more about that here.

Joseph senior died of fever in 1828, leaving widow Mary and the infant brothers.

The boys were educated in England. They were at Rugby School in 1841, with Joseph going on to study law, while William chose the Church.

(A Margaret Nixon was at Kirklinton Hall in 1841).

Brother Joseph Dacre (born India 1825) had inherited Kirklinton Hall and was living there for sure by 1846 (he was 21).

He was ‘of Kirklington Hall’ still in 1866, when he was heavily involved in efforts to combat cattle plague. As well as chairing meetings and proposing measures, he acted as a prosecutor in a court case over a cow that had been moved in breech of restrictions.

Sadly, within the space of a year his life fell apart: he was pronounced ‘of unsound mind’ by a medical inquiry in April1867.

WIth no wife or children, his heir was his younger brother William.

They’d married in London in 1850, the certificate recording his father as Joseph Dacre, writer, Hers ‘unknown’. Though there is a baptism for a Charlotte Sophia Holt, parents Thomas and Harriet, in 1831 (born 1827)

Charlotte Sophia Dacre died at Irthington in 1870. If she had any children, they didn’t survive to be recorded on any census.

William Dacre then married Margaret Jeffery, in her native Scotland, in November 1872. She was the daughter of the Rev George Jeffrey, of London Road Church Glasgow, and born circa 1844: 16 years younger than her husband. Again, there don’t seem to have been any children.

An article in the Carlisle Journal of May 3, 1872, forms the illustration to this post: it seems William Dacre thought hiring fairs were places of dodgy dealings (by publicans and traders happy to exploit  those attending). He also thought they were degrading to those seeking work.

William Dacre died in Portland Place, Middlesex, in 1903, with Margaret his executor.

That said, she wasn’t with him in Irthington on the 1891 census, nor on the 1901 census in Carlisle, when William was recorded in a boarding house in Cavendish Place.

Kirklinton Hall is now a beautiful venue for weddings.