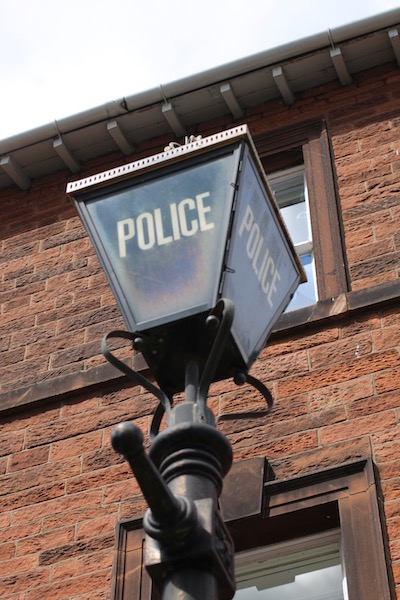 Thomas Hetherington gave at least 13 years of his life to the police service at a time when police forces in the UK were in their infancy.

During that time he was attacked, praised, rewarded, risked his life time and again – and yet it all seems to have come to an end with a fish.

A brief history of the police in Britain

You can find a potted history of the police here and here.

Like all good Cumbrian Characters, Thomas Hetherington’s story works better by starting with a key incident. And his actions in June 1841 certainly qualify as that.

In its June 12, 1841 edition, the Carlisle Journal reported the capture of a robber. Two weeks earlier, a ‘young man’ named James Thompson – a traveller for Richard Pattinson, of Carlisle – had been robbed on the highway to Greenhead and £161 stolen.

The trail led him to Ballinderry, County Antrim – and Mooney’s mother-in-law’s house, “situated in the middle of a peat bog.”

Henry Mooney and John Getty were both there.

And the courageous police officer Thomas Hetherington – on his own, miles from anything like back-up – charged them with the robbery.

Instead, there was a struggle, and he was hit in the face with a spade and kicked in the side. Mooney legged it.

The place was rural, but not isolated, as a ‘number of country people’ showed up. The intrepid Hetherington offered them a ‘handsome reward’ to catch Mooney. Which got them on his side. Some gave chase, till Mooney drew a pistol he’d taken from the original robbery victim, Mr Thompson. He did throw away a bag containing £138, and Getty was found to have £13 on him.

The Journal said Thomas Hetherington should be rewarded for his actions tracing the men, and his personal courage.

Thomas Hetherington did, in fact, receive £6 from Northumberland County Court, in recognition. And James Thompson and Richard Pattinson presented him with a handsome silver snuff box, engraved:

To Thomas Hetherington, inspector (sic) of Carlisle Night Police… for his extraordinary exertions and skill in the pursuit and apprehension of a highway robber.

Whose side are you on?

It wasn’t the first time Police Constable Hetherington had been hit in the face during a struggle – but at least this time it was by a fugitive robber. Previously, it had been someone who should have been on the side of law and order.

Yes, the above adventure was almost a year to the day after a ‘rather serious affray’ in Carlisle, involving police officers Hetherington and Storrow – and several of the privates of the 95th Regiment of Foot, stationed at Carlisle Castle.

There could have been two officers called Hetherington, of course: christian names aren’t given in the Journal, nor is their rank.

However, on the 1841, there is a Thomas Hetherington, 35, police constable, living in Blackfriar Street, Carlisle, with his wife Jane, 30, and daughter Isabella, 4. I couldn’t find another.

In this incident, Storrow had arrested a drunken man for an assault in the Malt Shovel public house. Several soldiers attacked him and tried to liberate his prisoner. Hetherington came to Storrow’s assistance, and was also attacked by the soldiers. They were made of strong stuff, for despite being outnumbered, they managed to get the prisoner to the lock-up.

Yeah, thanks for that, Sir

It wasn’t over, though. The police superintendent, a man called Graham, told them to go instantly to the castle and report the case to the commanding officer of the 95th Regiment of Foot.

Only one soldier, Michael Delaney, was identified. He wound up in the House of Correction for a month. At the court hearing, the mayor told him and other soldiers and officers who’d attended that soldiers were supposed to AID the police of the city, not attack them and throw stones at them.

Maybe the 95th Regiment of Foot got the message. The 87th Regiment did not. For in November 1840, soldiers from the 87th tried (helped by a mob) to rescue two of their number who had been arrested for aggravated assault in the Light Horseman pub, Rickergate. The superintendent of police was felled from behind with a blow to the head, and Thomas Hetherington was also knocked down. Police Constable John Kent struck the assailant with his staff.

The law-abiding folk of Carlisle weren’t always fully supportive either.

John Young was charged with assaulting Thomas Hetherington, police officer. He was said to have thrown him off a ladder, which the officer was using to check a caravan for a man named Coulson. Young also threatened to ‘knock the officer’s brains out’. But despite several witnesses supporting the case, the jury found Young not guilty.

There seems to have a been a lull in assaults on Thomas Hetherington, who pops up giving evidence in a lot of court cases. Such as that of Margaret McHaig, charged with stealing two sovereigns from a John Batey. Thomas told the court that when he arrested McHaig, she told him she had swallowed the sovereigns.

The drama was domestic in June 1839, when Thomas Hetherington’s wife was ‘awakened by a sense of burning’ and found the bed she ‘and the children’ were lying in was on fire. Probably from a candle. She got the children out ok, but suffered burns to her face, breast and arms. The fire was put out without damaging much more than the bed and bed hangings.

The story says ‘children,’ but by 1841, there was just Isabella, 4. Suggesting more sorrow for the family between.

Enough to drive you to drink

There was another court case in August 1841 where a number of men were accused of having riotously assembled and injured and obstructed officers, including constable Thomas Hetherington. It seems to have stemmed from ‘excitement’ over the General Election: the police were trying to escort someone called Goulburn out of a public house. (Possible election candidate Edward Goulburn, but the account calls him Sergeant Goulburn at one point).

A crowd threw stones at the police officers and shouted threats…

The key bit in this story is that Thomas Hetherington admits to the court he had been discharged from the police (then reinstated) for drinking and allowing one man to drink. He’d been a police officer for a few weeks short of six years. And when he had been discharged, he’d had a recommendation to be taken on again ‘from every gentleman in the town’.

An extraordinary case of arson

The burning down of the Angel Inn, Carlisle, in March 1841, caused a ‘sensation’, when the landlady, widowed Mary Chistopherson, her 14-year-old daughter Frances, and servant Mary Blaylock, 25, were charged with the offence. It’s a story in itself, but Thomas Hetherington played a part: entering a window with a hose to help tackle the blaze. And falling though the floor, which had been removed. In fact, in a number of rooms, boards had been taken up and piled up with shavings and  peat: kindling to spread the fire.

(Mary Christopherson was sentenced to be transported for life. Mary Blaylock, who’d wanted money to get to the USA, was jailed for 18 months).

Police Constables Thomas Hetherington and Haugh also assisted with a ‘famous’ fire in 1844: getting the fire engines on to railway trucks and on to  Brampton, to tackle the blaze at Naworth Castle.

Did Thomas Hetherington get fed-up being knocked about by villains and soldiers? Had he had enough of working endless nights? Or was he suspended from duty ahead of the court case below?

Jonathan Carlyle, fishmonger in Carlisle market, alleged that Thomas Hetherington had slapped him in the face with a trout.

He also accused him of stealing two slices of salmon. And said they were friends who often had a drink together. And that Thomas Hetherington had told him ‘there wasn’t a policeman that could catch a thief as he could’.

Mr Thompson of the Wool Pack ‘proved the assault’ (to the amusement, it has to be said, of those in the court):

He poked him with both hands in the breast, and took him up in his arms and wanted to kiss him. He then took up a fish and slapped him slightly on the face with it.

The court agreed with the defence case that it had all simply been a practical joke. They’d all have known Thomas Hetherington, and his record of serving Carlisle. And certainly didn’t think it likely he’d have stolen two slices of salmon. But as slapping someone with a fish was assault (albeit ‘not a very serious one’), Thomas Hetherington was fined sixpence.