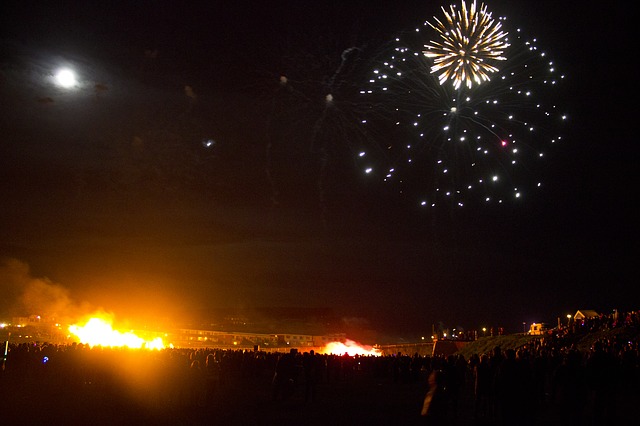 Bonfire Night is two days away – although ‘Bonfire Night’ is always dragged out across at least ten days, when it comes to people letting off fireworks!

For any non-British reader: Bonfire Night is a commemoration of the failed Gunpowder Plot of November 5, 1605.

It is a tradition to make a dummy out of straw – known as the Guy – and burn it on top of the bonfire.

Generally, the Guy is meant to represent Guy Fawkes.

But it’s not uncommon to burn effigies of other unpopular figures – usually from the present day.

The bonfire side of things pre-dates the failed assassination of King James I by centuries. Without wishign to get too sidetracked by Hallowe’en: our Celtic ancestors marked October 31/November 1 with bonfires.

In  November 1855, it was the Gunpowder Plot that was put aside when bonfire were lit in Appleby. And Guy Fawkes who got a reprieve from the flames in Penrith.

And it would seem the good folk of Cumbria then were experiencing similar weather to us this year!

‘Local intelligence. The Weather has been one continual drench from Monday to Friday.’

Back to Bonfire Night

The Cumberland and Westmorland Advertiser and Penrith Literary Chronicle also reported on the Bonfire Night celebrations.

‘The inmates of the Penrith Union Workhouse burned the Emperor of Russis in effigy.’

It was eight feet in height, stuffed with combustible matter, and placed on a long pole.

When the faggots under it were lit, the Emperor was ‘blown to atoms in the presence of a very large concourse of people’.

Cannon were fired during the evening, and a band played in the streets.

There were also bonfires at Blencowe, Longwathby, Melmerby and at several other villages. The Westmorland Cumberland Yeomanry Cavalry band were in attendance at Blencowe, and enlivened the country people with their music.

Remember, remember, the fifth of November

November 5 was also the anniversary of the Battle of Inkerman – one of the major battles of the Crimean War, which pitted an alliance of Britain, France, Turkey and Sardinia (the allies) on side against Russia.

Thus the Penrith workhouse inmates chose to burn the Emperor of Russia on their bonfire, as they recalled 1605’s ‘gunpowder, treason and plot’.

In Kirkby Stephen, the residents marked the anniversary of the Battle of Inkerman in a big way. Flags honouring the allied countries flew from the church tower and other places in th town. And at 6pm, Brough Brass Band and the Westmorland Yeomanry Cavalry paraded through the town, to the market place.

The band played military airs and the parade carried banners and torches.

At the market place, a cannon was fired before ‘a grand display of fireworks, purchased of and made by the pyrotechnic artist to the Zoological Gardens, London.’

Why a zoo would have a pyrotechnic artist..???

In Appleby, ‘the Gunpowder Plot gave place to the Battle of Inkerman, which was commemorated by a bonfire on the banks and a display of fireworks at the Low Cross. Both got up by the young gentlemen of the Grammar School.

‘An effigy of Czar Alexander was paraded through the streets, proceeded by Appleby Brass Band a host of torch-bearers.

‘At the conclusion of the display of fireworks, His Imperial Highness was blown up and his career summarily ended, amidst the loud cheers of the crowd’.