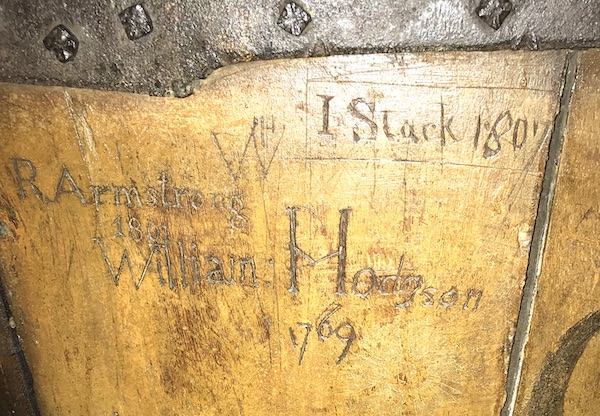 Is graffiti art or vandalism? Down the centuries, it has always been in the eye of the beholder. And time does make a lot of difference.

‘Graffiti’ today conjures up images of spray-painted scrawl along railway embankment walls and underpasses. Ugly urban structures rendered more noticeable, highlighting an air of hostility and deprivation by seemingly mindless repetition of ‘names’ that tell us nothing.

The word ‘graffiti’ is derived from the Greek word ‘Graffein’, meaning to write, draw, or scratch. But it was excavations in Italy that brought it into the everyday vocabulary of Britons. And in the 1850s, Pompeii was big news in the UK.

It was in 79 AD that the cities of Herculaneum and Pompeii were destroyed by the volcanic eruptions of Mount Vesuvius.

Their story continues to fascinate to this day. And in the 1850s, local newspapers across Britain were keen to supply their readers with the latest discoveries.

The first newspaper reference I found to graffiti (by that name) was a scholarly publication. The CCXXIV edition of The Edinburgh Review, in October 1859, included an article of The Graffiti of Pompeii.

An edition of Punch magazine the same month apparently included The Graffiti of London – a humorous take on the Review’s article, perhaps?

Excavations at Pompeii and Herculaneum continued to grip public interest, with reported discoveries in 1862 including the graffiti ‘OTIOSIS, LOCUS HIC, NON EST DISCEDE MORATOR (“This is no place for idle people. No loitering”).

Graffiti hadn’t begun and ended in ancient Rome, of course.

An article in the London Telegraph in December 1862 (on Pompeii) says:”

‘The inhabitants of the long-buried city, and of the ancient world in general, were quite as much addicted as modern Europeans and Americans to that species of mural decoration which consists in inscribing abusive criticism or sensational announcements on brick or stucco, occasionally accompanying their al fresco caligraphy with rough cartoons of a pictorial nature…’

‘…The civilisation of the nineteenth century has improved the wall-scrawlings of the ancients. The old primeval habit is certainly ineffaceable, and the youth of this country still persist in caricaturing their pastors and masters, their instructors, and their political governors on the walls; whilst the suburbs are permanently derogated with derisive denials of doctrinal points of Homish theology, scurrilous lampoons on unpopular members of vestry and the board of guardians, and fierce denunciations of church rates.’

By 1864, the word was being used beyond Italian excavations, with a reference to ‘the graffiti of the American Civil War’. While the wonderfully titled Tipperary Vindicator, in 1868, referred to characters and marks on ancient Irish stones as ‘our graffiti’.

A poet/sculptor/scholar called William Wetmore Story published a book of his verses in 1869 called Graffiti d’Italia.

William was surely the only man ever to rhyme ‘crinoline; with ‘conscious mien’.

In the eye of the beholder

In 1870, the Birmingham Daily Gazette observed that: ‘These accidental inscriptions are termed Graffiti…. curious to note that such pencilings or scratchings in the present day are much censured as defacing buildings and monuments, but the same kind of literary evidence has been most important in tracing out the history of the Catacombs as well as the history of the Pyramids in Egypt, and re-discovered cities of Pompeii and Herculaneum.’

And there’s the ‘thing’.

Because the passage of time transforms some graffiti from ‘nuisance’ to ‘historical record’.

On a family holiday, aged about 11 or 12, I chanced on a riverside shelter which had apparently been a popular spot for courting couples in the 1940s.

We were ‘doing’ the Second World War in History lessons at school. And I read the names, the dates, and wondered if any of those romances had lasted. If any of them had been killed in action or bombing raids.

Aged 15, my First True Love carved our initials in a heart on a tree. The National Trust probably would have disapproved strongly if they’d caught him doing it. Have people since seen it and wondered: ‘Who were there? Did it last?’ (It didn’t!).

These photos are of a wooden cabinet in Carlisle Cathedral. The church officials of the day(s) were unlikely to have been pleased at their furniture being defaced.

But today, those ‘scratchings’ are historic interest to visitors. 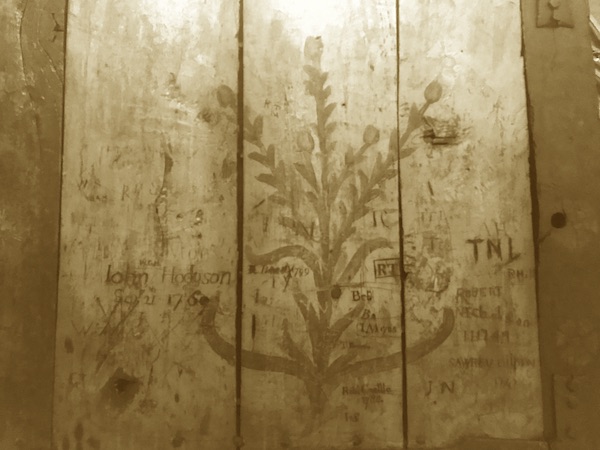 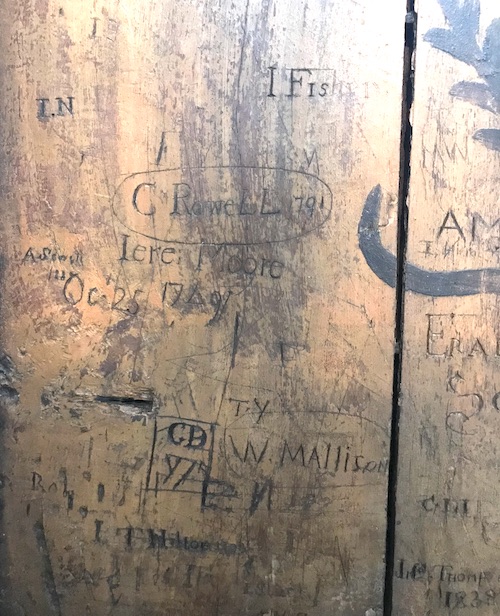 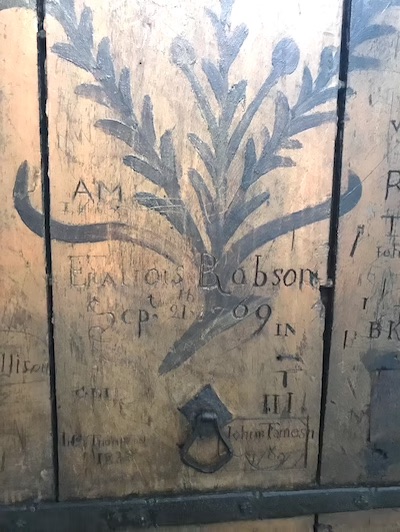