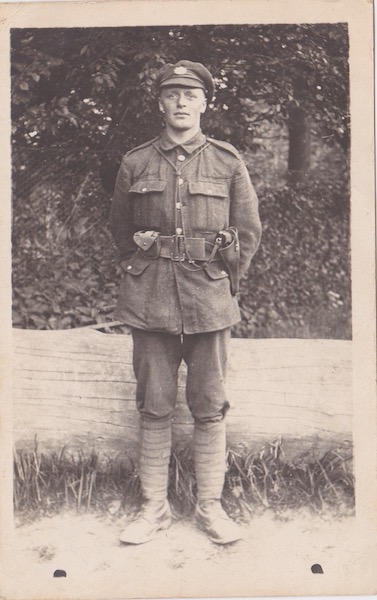 Prisoners of war have long been a staple of movies and TV dramas, from those based on  true stories like The Great Escape, to the enjoyable nonsense of Escape to Victory. The focus is almost always on the Second World War. This IMDb list of ‘Top 35 Prisoner of War movies‘ contains just one from the First World war; Jean Renoir’s 1937 film La Grande Illusion.

There are, of course, plenty of films about the First World War, depicting the horrors of trench warfare, the danger in the air. But the 10 million people (servicemen and civilians) captured and sent to detention camps  have been overlooked.

So far, I have covered the lives and deaths of seven of the 20 men recorded on the memorial tablet unveiled in Penrith Congregational Church in 1920 (you can find all the posts here).

Of those, three were killed in action and have graves ‘in a foreign field’; two were ‘missing, presumed killed’, their bodies either never found or never identified; two died from the long-term effects of being gassed.

The eighth died in a German Prison of War camp.

And in telling his story, I will add that of a comrade in arms who was among the prisoners of war in the same camp, but survived the experience.

They also connect to Private Joseph Harold Pilkington, in that a key date for both of them was March 21, 1918 – Day One of the Second Battle of the Somme.

All three were posted missing that day – and their loved ones back home endured the agony of fear, uncertainty, hope…

Private Pilkington was later ‘presumed’ to have been killed. Private John William Carruthers and Private Frederick William Walker were captured. For them, as the war movies have it, the war was over.

The second Battle of the Somme

‘The 5th Border Regiment had its headquarters at Roisel and was employed in making roads and tramways, while two companies were in the quarries at Templeux, engaged in the construction of huge dug-outs…’

John William Carruthers and Fred Walker were among the latter and all I know is that both ened up in Güstrow POW camp, around 200km north-east of Hamburg.

Prisoners of war – records and experiences

There’s an account of one British POW’s experiences there here.

But the best place to go for information on relatives who were POWs in the First World War is the International Committee of the Red Cross’ website, where you can search their 5 million records by name.

Güstrow camp was visited by a Red Cross inspector in 1915, not long after construction. Güstrow then housed 3,737 French, 2,684 Russian, 604 Belgian and 1,530 British men. The report, by National Councillor A. Eugster, is quite positive about the conditions, with few men ill and few punishments.

He found the French well-behaved, but the Russians and British ‘cause a lot of trouble when it comes to discipline’.

Sanitation and washing facilities were excellent, including daily hot showers for 900 men (see the numbers of prisoners a few pars above!)

However, while the 330 sick got extra rations, food was deemed insufficient, and the matter of bread was a ‘thorny one’

The NHS, for normal life today, recommends: ‘Within a healthy, balanced diet, a man needs around 10,500kJ (2,500kcal) a day to maintain his weight.’

As the war progressed, Germany suffered food shortages for her own population and rations for prisoners were reduced. Food parcels from home became important to survival. As in this article.

Our Penrith prisoners of war

So what of John Carruthers and Fred Walker?

Fred Walker was the lucky one, and is unconnected therefore with the Penrith Congregational Church memorial (or any other).

However, a young (in 1918) woman on my family tree was either his sweetheart or penpal. For she kept cards and photos – including a pencilled letter Fred sent her from the POW camp.

Fred’s parents were police sergeant Joseph Walker (born Cockermouth) and Jane, née Stamper. In 1901, they were living in Kirby Stephen.

In 1911, Fred was working on his grandparents’ (William and Ann Walker) farm at Cockermouth, confirmed (that it’s the right Fred) by the presence his younger sister Gertrude Mary. Brother Thomas Henry is with an uncle and aunt, with no sign of their parents.

He had a cousin called May Stamper, who was the best friend of the woman in my family who kept his photos and cards.

Fred was captured at Ronssoy. The records give his date of birth as December 6, 1895, Carlisle, and his home address as Cecil House, Little Broghen, Cockermouth.

Fred was repatriated at the end of the war, and arrived at Dover on November 29, 1918.

Beyond that, I know nothing. Except that my relative kept the cards etc despite marrying someone else.

John William Carruthers was aged 20, a farm servant who gave his address as Suttons Yard, Middlegate, Penrith, when he signed up in June 1915.

In 1901, he was with his parents (dad was a coal carter) at 66 Scotland Road. 1911, also Scotland Road, shows us John Edward and Catherine Carruthers had lost four children, out of nine.

The Red Cross record shows us:

A War Office letter says it is being officially recorded that he died ‘between 16 and 31 July 1918,’ from dysentery.

He died “while a prisoner of war in a German camp”, and his mother Catherine, of 3 Suttons Yard, said “Winskel’s statement contained the only news of the death of her son”.

However, it is very puzzling, for his war record also says he died in Péronne, France – hundreds of miles from Güstrow. Who Winskel was is also a mystery. The Red Cross doesn’t have records for anyone of that name (or variants of spelling).

Sadly, while trying to find more, I instead chanced on: ‘September 17, 1918. Private Joseph Carruthers, London Scottish, son of Mrs Carruthers, Sutton Yard, Penrith, died on September 3 in France from gunshot wounds to the right leg. He was 17 years of age and enlisted nearly a year ago. He was a carter for Mr G Harrison, grocer.’

The war records say he was of the East Surrey Regiment, formerly of the Liverpool Regiment. He enlisted on October 9, 1917, aged 17 years and 364 days. He was confined to barracks for seven days in November 1917, for ‘speaking untruthfully to an officer,’ and for five days early in March 1918, for overstaying his leave by one night. The records are badly damaged, so the details of his transfers from one regiment to another, to another, are unclear.

Having lost four of her nine children (natural causes, I assume) by 1911, and two sons in the war, Catherine Carruthers must have been relieved when the war ended in November 1918, when her remaining son Isaac was still only 15/16. And of course relieved her other two children were daughters.