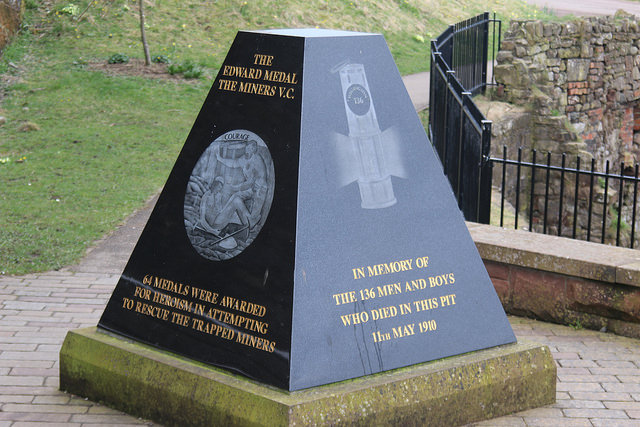 Today is the 119th anniversary of a dark day in Cumbrian history, for on May 11, 1910, at Wellington Pit, in Whitehaven, some 136 men and boys were to lose their lives in, or as a consequence, of an explosion.

It was caused by the miner’s great enemy: firedamp – methane. A highly volatile gas that can travel great distances. A naked flame or a simple spark is all it took to trigger the blast.

The disaster left 85 women widowed, and 260 children without a father.

But this isn’t the story of the disaster, for that has been told and retold elsewhere. The BBC covered it on the centenary in 2010.

So did the Whitehaven News.

And it would take more than one blog post to do it justice, because there are so many aspects to cover.

For instance, some 64 men were awarded gallantry medals for their attempts to rescue the trapped miners, as recorded in the London Gazette in July 1910 (see here and here).

This is the story of how death at Wellington Pit wasn’t just a one-off disaster. It was an all-too-frequent occupational hazard.

Wellington Pit – a mine under the sea

Wellington Pit had twin shafts, sunk in the 1840s. The surface buildings were designed to look like a castle – the walls and Lodge which remain could make visitors think there had been a castle there, if it wasn’t for the clearly industrial ‘candlestick’ ventilation chimney. It was one of three mines owned by Lonsdale estate, and was leased by the Whitehaven Colliery Company. The workings ran out under the sea. After the disaster, the pit reopened in May 1911; it closed in 1932.

In the first decade of the 20th century alone, death and injury were all-too common at Wellington Pit.

Deaths and injuries in 1900

Saturday, March 31, 1900. Shortly after 5pm Monday, John Hodgson, 17, of Catherine Place, West Strand, Whitehaven, was badly hurt when a wagon went over his foot at Wellington Pit Yard. He was taken to Whitehaven Infirmary.

He was knocked down by a sett of empty tubs. And died as he was being taken to the surface.

In July 1900, collier Edward Gill, aged 34, of 54, Middle Row, Newhouses, Whitehaven, went home from Wellington Pit and told his wife he had hurt himself while filling his last tub. He complained of pains in the lower part of his body, vomited – and died while Mrs Gill was out looking for a doctor.

The inquest jury decided he had died from ‘syncope,’ but couldn’t say if it was caused by the shock of the accident. Other colliers collected more than £9 for his widow.

Edward Harrison Bradley was just 14 when, he was killed at Wellington Pit just a few days later on December 18, 1900.

Bradley lived with his grandmother at 56 Back Row, Newhouses, and worked at Wellington Pit as a greaser, greasing the rollers of the engine plane.

A full sett and two clutch bogies knocked him down, then dragged him more than 200 yards. The Maryport Advertiser headlined it: ‘A boy cut to pieces’.

When the inquest was held the day after the tragedy, one member of the jury protested at being compelled to view such a sight as they had just seen (ie the body).

It seemed there was nothing to warn pit workers that a sett was approaching. And the undergound manager at Wellington Pit, James Henry, told the hearing there were plenty of applicants aged 12-14 who wanted to work in the pit. Verdict: accidental death.

It was an empty sett that caused fatal injuries to Henry Shepherd, 63, in October 1901. He was working to lay some water pipes when it hit him.

His son Harry Shepherd, 29, timekeeper at the pit, died of natural causes – penumonia – in 1903, leaving a widow and two young children.

He was luckier than Hugh Hetherington, 19 (son of Joseph Hetherington, of 20 East Row, Kells). Hugh was killed in September 1902, by a tub which fell out of the top deck of a cage.

Fast-forward 12 months and James Taylor, 50, a married man, of Albion Street, with six children was killed when a set of full tubs hit him, followed by a second.

On the 1901 census, the children ranged from James, aged 22 years old down to one-month-old Gladys.

Son James Taylor was killed in the 1910 disaster.

Reported as happy news in 1903: Triplets at Whitehaven. The wife of Michael McCumisky, of Front Row, New Houses, gave birth to triplets. However, babies Robert, James Edward and Catherine all died within a few weeks/months. Michael was a coal hewer at Wellington Pit – killed in the 1910 disaster; as was his brother George McCumisky. Oddly, the brothers were both put on the 1911 census (by Michael’s daughter, and George’s widow); their entries then crossed out.

March 1904 – and a fall of stone and coal at Wellington Pit left John Ruddy, 31, of 32, Back Row, Newhouses, in Whitehaven and West Cumberland Infirmary, suffering from a fractured thigh and a cut to his head.

The following month, the miners at Wellington Pit and Whitehaven Pit ‘gave 14 days’ notice to terminate contracts’. ‘About 2,000 hands will be affected by the stoppage’. William James Anderson, 40, of 8 Ginns, slipped and injured his back in Wellington Pit before the strike started. James Carty, 56, soon after lost three fingers when a large cobble came away.

WIth no agreement between the miners and the pit owners (the Whitehaven Colliery Company wanted to cut their pay rates), the strike/lock-out began on June 25.

The strike was still running in August. When Alderman Hastwell, of Whitehaven Town Council, was concerned they authority was losing £100 a month in rates alone because of the dispute. Councillor Burney mentioned a family of seven who had gone to the workhouse because of it. The council agreed to call on the mayor (Cllr J I Fisher) and MP (Mr A Helder) to see if they could a conference to try to resolve things.

Despite the strike continuing, in mid-August, there was another injury at Wellington Pit, when William Thompson, 30, of Bransty Villas, was caught between a full and empty sett, sustaining severe bruising.

Driven back to work

The dispute lasted around 14 weeks. The miners gave in, accepting the conditions the company had originally proposed. The struggle to survive on strike pay, and the fact that the relief funds were running low, led to a vote of 218 for accepting the employers’ terms and 305 against. While this was a majority of 87 against, it wasn’t the two-thirds majority the rules required to continue to stay out.

By then, the community was providing breakfasts for hundreds of children, and distributing bread to more than 200 families.

Those providing the breakfasts applied for Colonel Bain MP for a subscription: and the Whitehaven Colliery Company gave £50.

Work resumed. And so did the accidents. At the end of November 1904, William Macpherson was crushed between two setts, with injuries to his chest and left arm.

Robert Henry Pepper, 25, was struck on the head when a lamp fell from the top of the pit shaft on to the cage, in February 1905. He died in the infirmary – on the eve of what was to have been his wedding day. He lodged at 13 Bentinck Row, Ginns and was the son of John Pepper, of Haverigg, Millom. There is no mention of his poor fiancée.

That was the last death I found before the 1910 disaster. The catastrophe filled pages of newspapers the length of the UK for months: the intial news; tales of bravery; the accounts of the handful of survivors; the anxious families waiting hours at the pit entrance for news; the despair; the anger when the mine was bricked off to starve the fire of oxygen (it turned out no one could still have been alive behind it). The reports describe a town sombre and silent in grief; the worry, as the men from other shifts were effectively out of work with the pit’s closure, and; the relief fund that brought in more than £60,000 from well-wishers for the widows and their children.

There was even a message of sympathy, and donation of £100, from Queen Alexandra: herself deep in mourning, as Edward VII had died on May 6.

The London Daily Telegraph & Courier, in a moving article on May 14, 1910, about the atmopshere in the town, sums it up:

‘The Wellington Pit is no longer a mine; it is a vast, profound tomb.’

The fire was out by early June, but it wasn’t safe to re-open the pit until late September. Even then, it was an incredibly hazardous task to access the area of the initial explosion/fire (where two bodies were found), and then beyond. October 2010 was a month of funerals: the inquest jury acting as mourners for two men whose remains had not been identified.  The last body was recovered on December 8.

But it wasn’t the end of the tragedies that year.

On Friday December 9, 1910, at around 8.30-9am, a high retaining wall at Wellington Pit collapsed on to three cottages, trapping those inside.

William Cradduck, his wife and two children, were rescued from the first house.

Mrs Isabella McGee and her daughter Eliza were rescued from the second. Neighbour Mrs Dinah Mooney, 36, was also found dead in the McGee house. She was the mother of five.

Robert Craddock Charleton, aged ten, kept his spirits up while trapped for three hours by singing, and was singing: “God save the King” when finally rescued. He was asked to sing at the inquest, but both he and some of the jurors were moved to tears.

It wouldn’t do to give the impression Wellington Pit was the only one in Whitehaven that saw tragedy. (Or that May 1910 was the last one for Wellington Pit. Four men died there in December 1920, for instance). 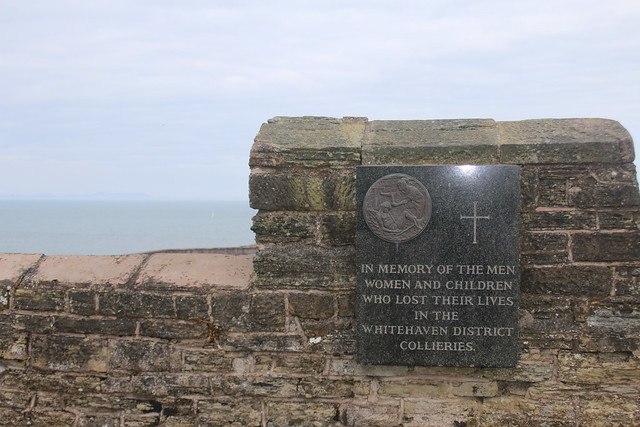 In November 1907, five men were killed in an explosion at William Pit, Whitehaven.

In 1947, an explosion at William Pit was to kill 104 workers: 14 directly in a firedamp explosion, the rest from carbon monoxide created by the blast.

You can (currently) watch it on catch-up here.