A post for Remembrance Sunday, with a reminder of a just a very few First World War Cumbrian casualties.

The ever-poignant commemorations of Remembrance are upon us in the UK. As a child, it was seeing the annual Albert Hall ‘poppy drop’ on television that moved me beyond words.

Watching the petals fall, in silence, settling like red snowflakes on those standing solemnly below, has always brought home just how many lives have been lost in conflicts.

Remembrance commemorations started out to honour those who died in the First World War: and it’s from there we have the red poppy as a symbol of Remembrance. I’ve borrowed the main image from the Royal British Legion website, so I can link to it for anyone who doesn’t know the ‘story’ or about the work they (still) do.

If only that truly had been ‘the war to end all wars’.

It’s also because of the First World War that British Remembrance commemorations centre on November 11: Armistice Day. Practicalities mean the main ceremonies of Remembrance take place on the nearest Sunday to that date. 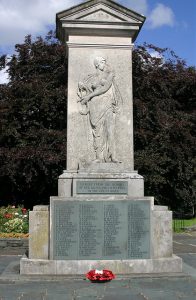 This year, it is the centenary of the original Armistice. And it seems like a special coincidence somehow that Armistice Day and Remembrance Sunday for once fall on the same day.

The image set into the text is of Keswick war memorial. Another family member’s name is inscribed on there, from the First World War, but he was killed in 1917.

The First World War touched every family in the nations that took part. None of my direct ancestors was killed on active service, but there are brothers and cousins who didn’t come home from war. Some leaving widows and children.

Here are the details of five men on my family tree: none of them is a close relation, and in fact only two are blood relations at all. But I selected them because they all died in 1918 – one just a few weeks from the end of hostilities.

Type of Casualty:  Killed in action

Those commemorated by the memorial did not die in major offensives, such as those which took place around Ypres to the north, or Loos to the south. Most were killed in the course of the day-to-day trench warfare which characterised this part of the line, or in small scale set engagements, usually carried out in support of the major attacks taking place elsewhere.

The POZIERES MEMORIAL relates to the period of crisis in March and April 1918 when the Allied Fifth Army was driven back by overwhelming numbers across the former Somme battlefields, and the months that followed before the Advance to Victory, which began on 8 August 1918. The Memorial commemorates more than 14,000 casualties of the United Kingdom and 300 of the South African Forces who have no known grave and who died on the Somme from 21 March to 7 August 1918.

Private Hugh Coulston. youngest of Mr. W. Coulston, Melkinthorpe, has been killed in action. His officer writes that Coulston was buried by a shell on March 29th, and in spite of every effort made to save him he could not be got out. He was 27 years of age, and previous to enlisting managed his father’s farm at Melkinthorpe. He joined the R.F.A. in February last year. was transferred to the Machine Gun Corps in July, afterwards was attached to the Northumberland Fusiliers. and went to France on September 28th. His last letter was received on March 29th—Good Friday, the day of his death—and in it he said he hoped tonbe getting a leave soon. He was an old boy of Lowther Sehool.

A coal miner when he signed up, he was initially listed missing: October 5 was his ‘presumed’ date of death.

Country:  France Chocques is 4 kilometres north-west of Bethune on the road to Lillers.

Historical Information:  Chocques was occupied by Commonwealth forces from the late autumn of 1914 to the end of the war. The village was at one time the headquarters of I Corps and from January 1915 to April 1918, No 1 Casualty Clearing Station was posted there. Most of the burials from this period are of casualties who died at the clearing station from wounds received at the Bethune front. From April to September 1918, during the German advance on this front, the burials were carried out by field ambulances, divisions and fighting units. After the Armistice, further graves were brought into the cemetery from a number of small cemeteries and isolated sites in the area. Chocques Military Cemetery now contains 1,801 Commonwealth burials of the First World War.

The Penrith Observer of May 7, 1918, reported that Penrith Rural District Council moved a vote of condolence to the parents of ‘a promising young man with bright prospects’.

The paper’s Roll of Honour that day reported nine men killed, along with 13 others wounded and/or taken prisoner, and seven reported missing.

John Heskett would have been 20 on May 7, and was serving his articles with Messrs W Heskett and Son, land agents, Penrith, up to the time he joined the Artists’ Rifles. He was given a commission after his training and had been at the front ‘a considerable time’. He had only returned to France from leave on Easter Monday, April 1.

Harbonnieres was captured by French troops in the summer of 1916. It was retaken by the Germans on 27 April 1918, and regained by the Australian Corps on 8 August 1918. Heath Cemetery, so called from the wide expanse of open country on which it stands, was made after the Armistice, next to a French Military Cemetery, now removed. Graves were brought into it from the battlefields between Bray and Harbonnieres and from other burial grounds in the area