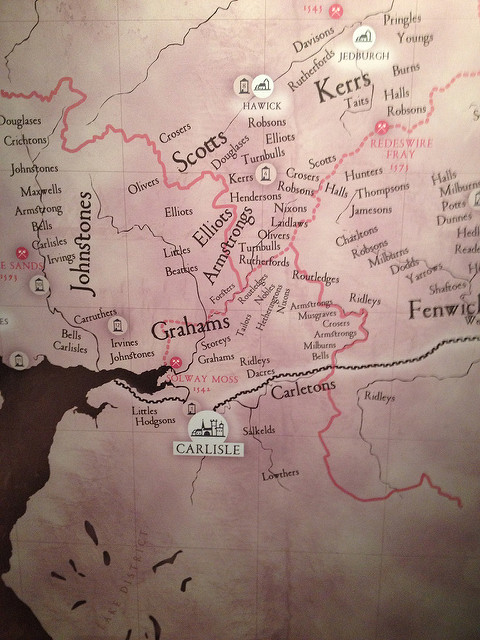 A tragic case of mistaken identity in Walton in April 1851 ends (in the Carlisle Journal’s account) with a reminder of our reiver forebears. For the victim was William Elliot Armstrong of Sorbietrees, in Liddesdale, Scotland – today, a bed and breakfast.

The tragedy was reported by newspapers the length and breadth of the UK. The Journal really went to town with the story, to the point of including woodcut illustrations (incredibly rare in provincial papers in those days).

The short version is that the unfortunate Mr Armstrong had been to Brampton on business, leaving about 8pm.

He knew a former servant, Ann Glendinning, now worked at Parsonage House, in Walton, and decided to call by, hoping to persuade her to go and work once more for him.

Knocking on a window at 11pm maybe wasn’t a bright idea on a good day. For William, it was a fatal mistake. For inside, the ‘exceedingly timid’ Reverend Joseph Smith, the Perpetual Curate of Walton, was terrified. The house stood alone, he was fearful for his wife and children, and he’d had experience of vagrants knocking before ‘more by way of intimidation than for charity.’

At the inquest, he said he’d obtained a gun after reading reports on ‘the Frimley murder* and other cases of that kind’. He’d opened his front door, and fired the gun two or three times, hoping to scare off the intruders.

It wasn’t till poor William’s body was found next morning that it became clear he’d been hit by two of those shots.

The inquest jury found it was a case of manslaughter: the Rev Smith was too distraught for the question of bail to be resolved.

He was bailed, and appeared in court in August to face the charge. When the jury acquitted him, he fell to his knees and raised his hands to heaven.

William Armstrong of Sorbietrees was buried in Ettleton, a tall obelisk marking the grave.

It was reported that mourners formed a procession a quarter of a mile long, such was William’s popularity.

The Journal said he was considered one the handsomest men in Liddesdale – and the representative of a long line of ancestors, famous in their day as chiefs and leaders in the border warfare.

It continued that he was known locally as ‘Sorbietrees’ rather than Armstrong – in the old tradition of distinguishing people by where they lived rather than their surname.

As Sir Walter Scott’s old shepherd explained it: “The folks hereabouts are a’ Armstrongs and Elliots and sic like – twa or three given names’ – and so for distinction’s sake, the lairds and the farmers have the names of the places that live at, as, for example… o’Sorbietrees.”

Lesser folk were known by nicknames.

And a look in the index of George MacDonald Fraser’s excellent book about the reivers,  The Steel Bonnets gives plenty more examples, such as (for the Armstongs) David Bangtail, Ill Will, and the infamous Kinmont Willie.

As well as Fraser’s book, a good place to start learning about the reivers is the excellent Tullie House Museum, in Carlisle.