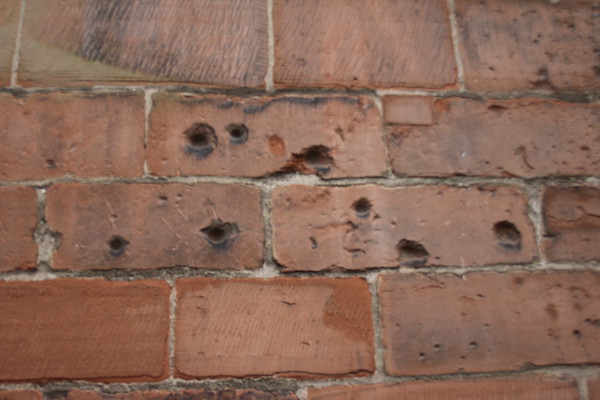 Carlisle Cathedral inside is, I once heard a visitor like: “like something out of Harry Potter.” And its walls inside and out tell the city’s history: inside, through memorial tablets; outside, through hundreds of holes.

Cumbrian Characters looked in brief at the 1745 Jacobite occupation of Carlisle in this post.

It’s a topic covered in greater detail in many places. I enjoyed this one, for example.

This short post is something of a post-script to my original. 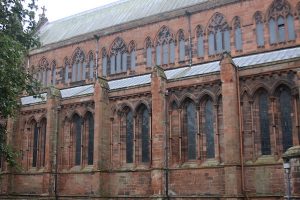 In the year 1745, Carlisle fell into the hands of the Pretender and when retaken by the Duke of Cumberland, the whole of the garrison were made prisoners of war and confined in the cathedral. The ponderous gates of entrance to the aisles (more fitted for a prison than a church) were erected at that time.

It is somewhat remarkable that on the basement wall of the north aisle and transept, on the outside, are to be seen many hundred holes such as might be made by musket shot. The soldiers, when the danger was over, might here have idly discharged their pieces. Or the citizens, in some one or other of the numerous sieges which the city endured, may here for a time have held out against a victorious foe.’

Meanwhile, in 2019, when building the lovely new Fratry building at the cathedral, workers unearthed musket balls, among other discoveries

The new Fratry café, by the way, is very nice for a spot of lunch, or coffee and cake! (Mind you, I was fond of the original as well).

And if you take a walk round the outside of the cathedral before or after, you can indeed see a LOT of holes that look to have been made by hard, round objects hitting them with force. 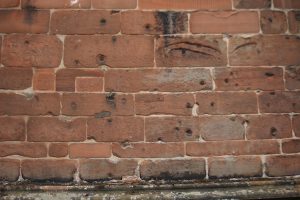 And if you are interested in historic graffiti, you can find more photos from inside Carlisle Cathedral in this previous post.

Graffiti – the good, the bad and the ugly