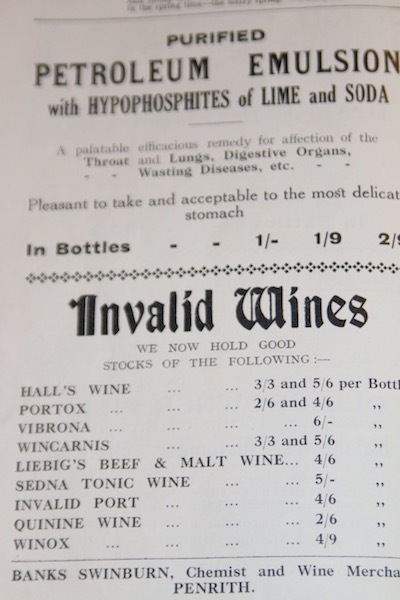 In July 1863, a former Carlisle weaver named Thomas Hetherington was fined £5 by magistrates in Hartlepool for selling quack medicines in the market place there.

The name is too common to trace – there are no obvious candidates in Carlisle in 1861. What surprised me a little was the prosecution.

Because trading standards in Victorian times left a lot to be desired. Meanwhile, advertising standards were pretty much non-existent.

The Advertising Standards Authority website says advertising controls didn’t really take off until the 1920s. Before then, quack medicines could be advertised with impunity.

‘Doctor’ Samuel Solomon, of Liverpool, made a fortune out of his Cordial Balm of Gilead.

An 1801 advert claims it offers permanent relief to nervous disorders proceeding from immoderate use of tea, hard drinking, excess of grief, dissipated pleasure, immoderate course of the menses, etc.

Supposed to contain ingredients from the Holy Land, it was actually lemon peel and brandy. Which may have offered some temporary relief from period pains, but probably didn’t restore thousands in the West Indies ‘from the jaws of death’ from yellow fever, as claimed.

Real medicine was making strides. Also in January 1801, upwards of a thousand people, of all ages, were innoculated at Lowther with the cow pox vaccine, by a Dr Thornton, of London, who was visiting the Earl of Lonsdale. The Earl had previously sent a healthy girl ‘infected with this matter’ to a Dr Heysham, and ‘from this subject’ the vaccine was produced.

But, such progress may inadvertently have helped purveyors of quack medicines to trick people. If you know real medical science is making valuable discoveries, who is to say the pills and potions being advertised aren’t among them?

And it wasn’t just ex-weavers peddling quack medicines as miracle cures. Though you have to hope the shop keepers who stocked them believed they were genuine products, with medicinal value.

Jefferay Carruthers – cures for all ills (and fine tea!)

In 1853, one advert says J Carruthers, chemist and grocer of 56-57 Scotch Street, Carlisle, stocks Measam’s Medicated Cream. Who knows what was in it, but it was said to cure everything from scurvy to rheumatism to a foot run over by a railway waggon, to cancer!

J Carruthers was Jefferay Carruthers, who in a previous post was advertising coffee and tea.

The son of George Carruthers and Mary Peat, he was born in 1825. Father George was a seafarer turned grocer and publican, who kept a pub at Annan (where Jefferay was born),  and later the Highland Laddie pub, at Glasson.

Jefferay Carruthers established himself in Scotch Street (first door above the butcher’s market). In 1853, he also opened a drug, grocery and general provision shop in Port Carlisle – where his (late) mother’s family were well established.

Jefferay Carruthers’ Carlisle shop (for sure) also stocked: Dr Scott’s Bilious and Liver Pills, Lambert’s Asthmatic Balsam, and “A New Discovery… Irving’s Syrup of Wild Cherry not only gives freedom of breathing in ten minutes, it prevents consumption. And cures coughs and colds.”

Perhaps it is unfair to lump all these into a post talking about ‘quack medicines’. Dr Scott’s Bilious and Liver Pills were still being marketed in the 1950s and for all I know, may well have contained ingredients that were good for the digestive system. It’s Victorian advertising claiming that what may simply have been an antacid could also cure giddiness, coughs, colds and depression that taints things with quackery. At least they didn’t contain mercury – once thought a cure for diseases of the liver.

And it’s not like we should be smug today about our ‘gullible’ ancestors – aromatherapy, anyone?!

Shop-keepers did at least need an annual licence to make and/or sell medicines – though this seems to have been more about tax than public health!

Thank you darling, for sharing

He may well also have stocked sarsaparilla. The following testimonial for sarsaparilla appeared within an advert the Carlisle Patriot on October 29, 1853.

‘My wife has been afflicted for the last twenty years with general debility, prostration, sour stomach, costiveness, piles, dyspepsia and nervous sick headache.

‘She has suffered also with pain over the small of the back and a burning sensation over the chest and abdomen.

‘All these difficulties were brought on from taking a violent cold during menstruation, which fastened upon her system with such tenacity and violence that it broke down all her strength and made her a helpless invalid.

‘All cured by less than two bottles of Old Dr Townsend’s Sarsaparilla.

For the sake of poor Mrs Worth, one can only hope that it never appeared in any newspaper in Virginia, for her friends and neighbours to read.

Fast forward a while

The advertisement I have used to illustrate this post comes from an almanac that is among an assortment of ephemera handed down through my family.

If the thought of beef & malt wine wasn’t enough to make you pretend to feel better, the threat of drinking diluted petrol sounds a real ‘kill or cure’.

The date of the almanac?

Coughs and sneezes and Victorian ‘cures’