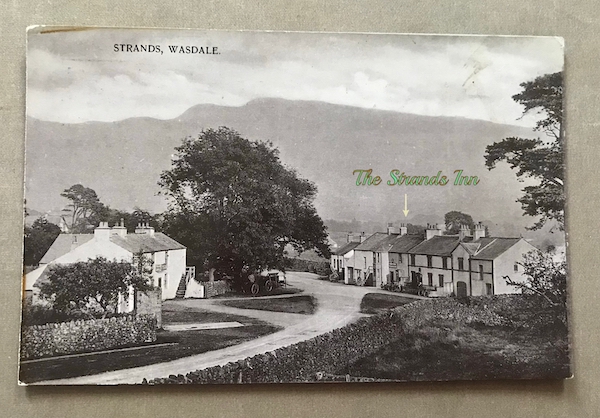 The Strands Inn and Screes Inn were built in 18th century and both retain many original features, with log fires and wooden beams throughout… (they) are perfectly positioned to explore the natural beauty of the Lake District National Park. Wastwater and Scafell Pike are both within walking distance.

Most people think of buildings and land as possessions of the owner. The owners of ‘great houses’ and estates probably realise that they are more the custodians. Their tenure will be transitory, in the ‘grand scheme of things,’ and it is their duty to maintain it for the next generation, and the next…

A look at the history of the Strands Inn, Netherwasdale, illustates that.

Mr. William Tyson, of the Strands Inn, in Netherwasdale, has a hive of bees which stands in a cavity of the wall in his garden.:

This was apparently newsworthy enough to be picked by the London newspapers! As the story, two years later, that

A sheep belonging to William Tyson, the Strands Inn,  was twenty-six days under the late snow, and came out quite healthy.

1829 May letter to Cumberland Pacquet:

Saunter into the secluded churchyard where “The rude forefathers of the hamlet sleep;” and if in a moralizing humour, or with a Lady June Grey in  your company, step over the way to the “Golden Fleece,’ kept by Mr. Thomas Russel, who will happy to furnish you with Plato, the immortality of the soul, in Greek —or with nutritious aliment to prevent the immediate mortality of your own corpuscum, in English.— If you  prefer fish to Greek, let the Strands Inn content you, where you will meet with good entertainment and very reasonable charges.

Deaths. On Saturday last, after a long illness, borne with Christian patience, Mr. John Tyson, landlord of the Strands inn. Netherwasdale, aged 75 years. He was an upright, honest man, beloved by his neighbours, and greatly respected by all who knew him.

Was he the brother of William?

A public auction was to be held at ‘the house’ (pub) of Miss Hannah Moore, the Strands Inn, Wasdale the 24th

In 1841 Hannah Moore married Jonathan Simpson, who signed the marriage bond with his mark.

They were both ’21 or upward, however:

The Inn is well situated for Business, and contains comfortable Accommodations for Lake Tourists, by whom it much frequented during the Summer Months. The Tenant can accommodated with Two Boats upon Wast Water, if deemed desirable. Terms and Conditions may known upon Application to Mr. Jonathan Simpson, the Owner..

One party for married people…

On Tuesday and Friday last, Mr. John Gunson, the new landlord of the well known Strands Inn, in Netherwasdale, held his cellar opening, the former day being set apart for the married and the latter for the single people.

The ‘very numerous and highly respectable company’ on the Tuesday enjoyed sports on the village green, before ‘seventy persons sat down to an excellent supper’.

On the Friday, nearly 200 young men and women sat down to a ‘sumptuous supper’, before a ball.

The ballroom was most gaily and gracefully ornamented, not with evergreens and flowers, but with beaux and belles—with youth and beauty, such as no other neighbourhood could have equalled, let alone have surpassed. Every countenance literally beamed with delight, and seldom has the eye of man beheld a scene of greater happiness and enjoyment, which was kept with unminglcd pleasure until the dawn of the following day

The Gunsons were still running the Strands Inn in 1848, when:

May 27, Marriage: Mark Pharaoh, stonemason, to Miss Mary Leech of the Strands Inn, and daughter of Peter Leech of the Lion and Lamb, Gosforth.

Whatever the Leech/Gunson connection was, at the time Peter Leech was landlord of the Lion and Lamb Inn, Gosforth.

John Gunson respectfully nforms his Friends and the Public that he has taken and entered upon the Inn known by the Sign of the ”Lion and Lamb,” situate in Gosforth…

His cellar opening would again be held over two days, in July.

‘Literary tourists’ at the Strands Inn

A party spent Wednesday night and a part of Thursday, last week, at Mr. Wilson’s, the Strands Inn… some of whom passed over the ragged steps of Hardnot and Wrynose in a gig, from Ambleside. Miss Martineau and Douglas Jerrold were of the number : and the party doubt ranked amongst them other literary characters…

You can read about Harriet Martineau here

With so much material, I am splitting this post. Check back in a fortnight for part 2!