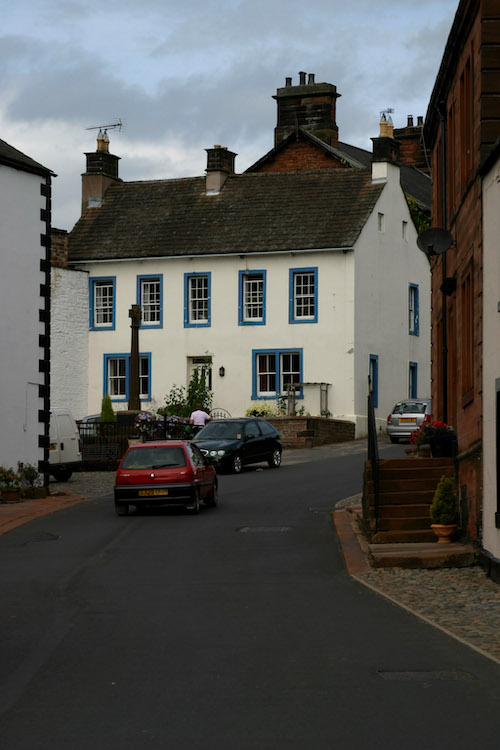 Kirkoswald parish registers have a lot to tell family and social historians, even if your family have zero connection with this Cumbrian parish.

Trawling through parish registers is a lot harder than putting a name into an online search box. But then baking a chocolate cake and eating it is far more satisfiying than taking a shop-bought one out of the cupboard!

I have been known to (quietly!) punch the air and exclaim “yes!!!!” at a discovery made ‘the hard way’ in archives or other records offices.

And while looking for members of my family, I have discovered other stories along the way. They may distract me from the main task, but they have often given me a greater understanding of how people lived in a particular time or area. And that gives me an idea of what life was like for my ancestors.

The registers for Kirkoswald, in Cumberland (Cumbria) are a good example. You can actually find a typed transcript (created by local vicar the Rev John J Thornley, in 1901) on the Society of Genealogists website.

This is searchable by index boxes. But it’s also possible to read every page. You get more out of it, can maybe spot things the indexer missed – and yes, I am happy that vicar typed it up! Scrolling through miles of microfilmed scans of original registers does take a lot longer. The scans aren’t always grea, due to the condition of the original registers. And some clergymen’s handwriting down the centuries is harder to read than others’!

In 1737, on December 8, Henry Hutton stood in church, likely with his wife, for the joint funeral of their daughters Ann and Sarah.

Less than a fortnight later, they were back: for the funeral of their daughter Mary, ‘an infant’.

Assuming there weren’t two Henry Huttons in Kirkoswald at that time (and that IS an assumption), we find he was in church in June 1723 for the happy occasion of his wedding, to Mary Richardson.

A baptism followed 11 months later: a son, called Thomas, was christened in May 1724.

However, there are no baptisms for any of the ill-fated daughters.

There are a bunch of possible explanations for this, and we can’t know which is correct. One is that they were baptised in another parish (there is a Sarah christened in Addingham in 1733, to a Henry and Mary Hutton. Not a million miles from Kirkoswald). Another is that they used one of the non-conformist chapels for baptisms, but the Anglican church for funerals as it had a burial ground.

There is nothing else (without a lot of work) to tell us more about Henry Hutton and Mary. The register has a Mary Richardson baptised in 1702 (father Thomas), making her about 22 at marriage. But it’s a very common surname.

If you scroll through census returns, beyond your family members, you get an idea of their neighbourhood or village.

For instance, ‘coal miner’ turns up on returns for the Kirkoswald area – which may surprise modern visitors to the area.

The Kirkoswald parish registers take this back well before the earliest census (1841).

For instance, they tell us that in 1714, a child (Thomas) was buried, son of Thomas Wharton, fuller, of Huddlesceugh Low Mill.

This isn’t the place to go into fulling in any detail (it was to do with cloth). But the entry tells us there was a fulling mill in the area, and where.

In my post on poor relief, I touched on the topic of women seeking parish help to raise illegitimate children.

The parish didn’t want to pay from its own, limited funds if there was father who could do so.

If you order a birth certifcate for an illegitimate child, the father’s name will be left blank. Many baptisms likewise only record the mother. Eg.

From earlier, legitimate baptisms, it would seem Dinah had been married to Edward Moffet. The burials have ‘Edward Moffet, poor householder’ dying in the autum of 1757. So clearly, Dinah couldn’t pretend Isabel was legitimate.

Isabel’s father is a mystery. But in many cases in the Kirkoswald registers, the vicar of the day makes it easier for the mother to claim maintenance from the father by naming him in what was, after all, a legal and official document.

Hmm. Story or two there, it would seem. Including some sad ones:

Elizabeth is likely a similar age and therefore maybe baptised 1758, daughter of John Dodd. Maybe. And maybe that means two cousins had angry fathers in 1779/81.

Other entries in the Kirkoswald registers I jotted down, without looking into further, are just ‘human interest stories’.

No mother this time. Had she died?

That one would have made some interesting Christmas cards, had they been invented then!