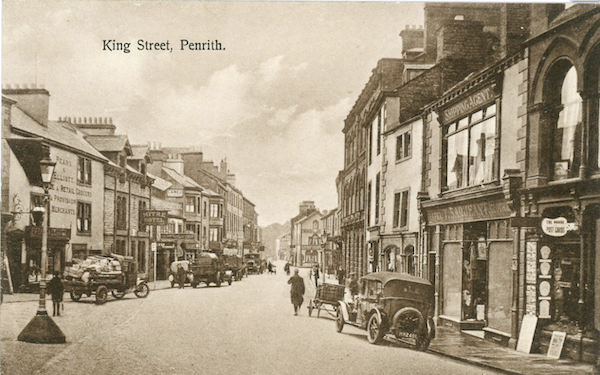 It was good to see this week that the the Cumberland & Westmorland Herald has been saved, after going into voluntary administration a fortnight ago.

Established in 1860, the Herald is an independent weekly broadsheet newspaper covering a large area of East Cumbria, including the towns of Penrith, Appleby, Kirkby Stephen, Keswick & Alston. Their website is here.

The present home of the Cumberland & Westmorland Herald in Penrith is at 14 King Street: in a building that’s a familiar part of the landscape now, but has been rebuilt or substantially remodelled from days gone by.

Old postcards from the first decades of the 20th century show the old building as it was (next door down from the Mitre Hotel).

The Cumberland & Westmorland Herald has one here:

In 1869,14 King Street was the home of John Simpson, leather merchant.

In February 1869, John Simpon’s advert in the Herald was for sewing machines: those of Jones & Co, of How, and of Wheeler & Wilson. For which John Simpon’s was an agent.

These sewing machines ‘seldom get out of order and are easy to learn’.

The advert ran pretty much unchanged for years, though by 1871, Wilson, Jesper and Co, were also selling the same sewing machines at 1 and 2 Middlegate.

The era of the motor car begins

So, by September 1905, life had moved on, and 14 King Street was the home of the Graphic Motor and Engineering Co Ltd.

In December 1905, the Graphic Motor and Engineering Co Ltd were exhibiting ‘the famous Brouhot cars at the Paris salon’. And promising they could supply ‘any make of motor car’.

As there were only 23,000 cars on Britain’s roads by the end of 1904, it must have seemed a very modern and exciting business to many folk in Penrith. Unless they disapproved of the new-fangled inventions!

The ‘famous Brouhot cars,’ by the way, only lasted until 1911, which is why they don’t seem so famous to us today! 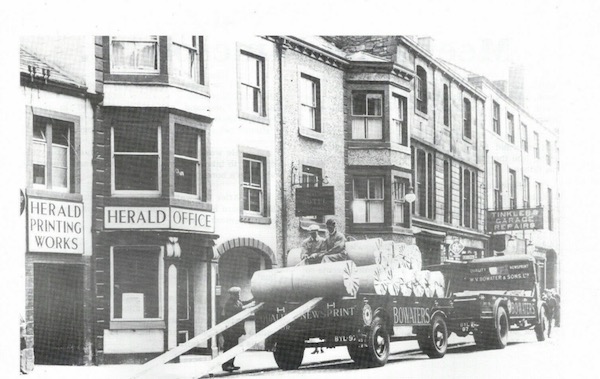 Keeping up with the times

By January 1906, the Graphic Motor and Engineering Co Ltd were boasting (still in the Cumberland & Westmorland Herald) that they were ‘up-to-date with all the latest improvements’.

By 1913, the garage was proclaiming: ‘tyres a speciality’ (which somehow makes me think of Wallace and Gromit!).

At what point Graphic shut its doors, I don’t know. But in 1919, tractor drivers and tractor ploughmen wanting good wages were invited to apply to T H Scales, 14 King Street, Penrith.

And a photo from circa 1920 shows ‘Armstrong and Fleming garage and repairs’ – with the building incorporating the Herald Printing Works.

In August 1941, Armstrong and Fleming, of 14 King Street, Penrith, were advertising for a ‘junior lady clerk’.

By now, the landscape of King Street had changed: the old number 14 looks more like that inhabited by the Cumberland & Westmorland Herald today.

Pears & Elliott, the other side of the Mitre Hotel, shut up shop in 1954. The buildings (which has been the Bell and Bullock pub till 1900) were bought by J & J Graham, grocers. Who sold them to Armstrong and Fleming – who demolished them to make way for a new garage.

There are stories to be told about that: for another time.

You can see (and indeed order a print of, should you wish) a circa 1955 postcard of King Street, at the Francis Frith collection.

Plans have been submitted to Eden District Council for the Cumberland & Westmorland Herald’s former printworks at King Street, Penrith to be transformed into a “drinking establishment” which also serves food and offers hotel rooms. More details can be found here.

I’m sure lots of people know more about when the Cumberland & Westmorland Herald took over fully at 14 King Street. Always happy to update posts with new information.