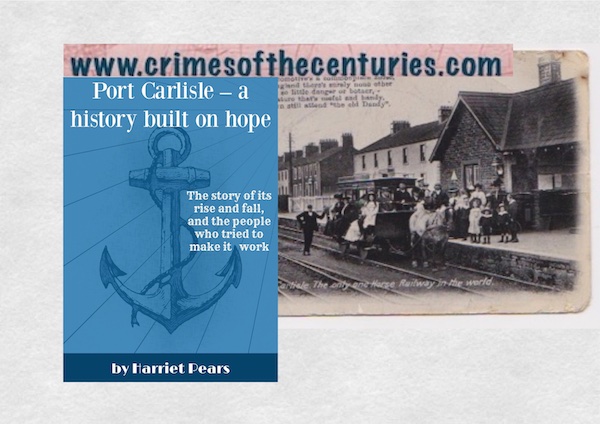 The Port Carlisle Dandy was a curious invention – even in its day, it was regarded as an oddity. It also symbolises how high hopes of transforming Port Carlisle (by the canal, by the railway) were doomed almost before the celebration cake had been finished.

The following is an extract from my book, Port Carlisle, a history built on hope. You can read more about it in this post. And you can buy in on Amazon here (search for it on Amazon if you are outside the UK).

…The short version is that the regular passenger rail service from the Drumburgh to Port Carlisle branch line (as it became from August 1856) proved uneconomic. So, it was replaced with the quaint and slightly bonkers idea of a carriage pulled on the rail tracks by a horse.

Finding accurate information on the history of the Dandy cars has proved tricky: different sources suggest different dates for its introduction, and disagree on how many Dandy cars there were over the years (three/four?) and when they were introduced.

Not wishing to print misinformation, I’ll leave it for others to come up with a definitive history. This book is, after all, focussing more on people and the spirit of the place than technical details about masts on sailing ships, or classes of steam engine.

Hello Dandy, but when?

When did the Port Carlisle Dandy make its first run? One source says 1856 (as soon as the Silloth line opened), another 1857, a third 1861, a fourth 1863. Perhaps it depends on when the name ‘Dandy’ was first applied.

In October 1856, the railway company had sought tenders for an engine shed, tank house and carriage shed. And not long after, a 16-year-old stoker called Edward Cartner was fatally injured when he fell reboarding his engine and was run over by a waggon. (There are two candidates on the 1851 census).

But was this on the Port Carlisle branch, or the main line?

In March 1857, William James announced that thanks to the Silloth line opening, the Port Carlisle Railway had taken about £1,000 extra in the first half of its financial year.

“Should the revenue of the company continue to increase in the above ration, there can be no doubt that the line, though at present unremunerative from the large amount of interest now payable will ere long become a remunerative undertaking.”

It says the company supplies the engine power for the Silloth line as well, and has three engines: one tank engine, and two new, powerful tender engines…