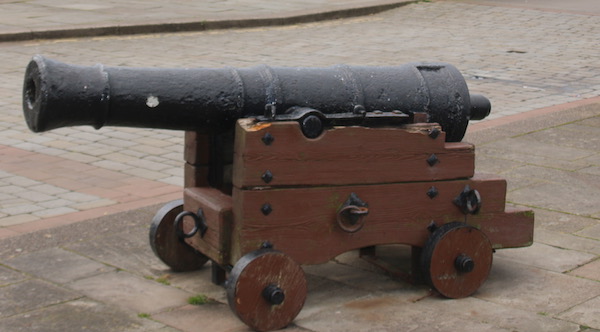 If the militia in the late 1700s were akin to Dad’s Army, the commander of the Westmorland Militia was… well, he was Wicked Jimmy.

Most families have a black sheep somewhere down the centuries, but the term doesn’t seem quite enough to describe James Lowther, the first Earl of Lonsdale. Known as Wicked Jimmy after his death, I suspect he had a few nicknames privately while he was alive. Corrupt, heartless, merciless, a bully… A talk reported in the Cumberland & Westmorland Herald in 2013 gives a flavour of the man.

Hands up, his attempted land grab of Inglewood Forest in the 1760s (from the Duke of Portland) seems to have forced one of my ancestors to give up a farm the family had occupied for generations. For in 1765, Wicked Jimmy served 400 freeholders in Penrith and Inglewood Forest with writs of ejectment. And it was between 1765 and 1768 that my ancestor moved to Torpenhow.

However, in the interests of fair play, the following is presented as impartially as possible!

Lord Maitland presented a petition, signed by four officers of the Westmorland Militia, complaining that the regiment’s commander, Sir James Lowther, had been guilty of ‘great peculation and oppression’.

‘Peculation’ was embezzlement of public property.

General Conway outlined the history of the matter, saying it had begun in July 1781, when charges had been made against the baronet. Some of his accusers hadn’t been ‘of the military profession’ and therefore might not be thought the most proper prosecutors for a military offence.

General Henry Seymour Conway had investigated, and a board of general officers, who didn’t think there was sufficient grounds for a court-martial.

The general thought the charge of false musters was groundless, as the regiment was complete on inspection.

Their clothing was finer than that of any other regiment, the lining finer by much than ordinary, and the buttons very handsome.

The idea of the baronet pocketing money was laughable, given the unpaid bills were for small sums.

As to the arms, the baronet had applied for new ones.

He said one of his accusers – a Whitehaven apothecary called Jackson – had no connection with Westmorland and was a man of no property.

He, on the other hand, was ‘the owner of land, fire and water’, in a town that had grown under the ‘fostering care’ of his family.

He said he had paid Mr Rice the music master £300 to teach his regimental band to play. And dwelt much on the poverty of some of his accusers, seeming to infer that made them likely to be lying.

SIr Charles Turner intervened here, saying he would not put up with such accusastions against the poor. The House of Commons was the best place the poor could seek justice against the rich and powerful, and he would ever lean in their favour.

Charles James Fox said Lord Maitland’s intentions (in presenting the petition) were most patriotic, but the House wasn’t the place for such petitions. He was also satisfied with the baronet’s defence.

In the end, the House decided not to bring up the petition.

In early April 1783, one Captain Ralph Gowland of the Westmorland Militia distributed hand bills trying to prejudice the character of Robertson Lidderdale. Lidderdale paid for a notice in the Cumberland Pacquet, saying he was a party to the petition to Parliament about the regiment. He expressed his contempt for Gowland, hinting at behaviour that made it ‘impossible to consider him a gentleman’.

Lidderdale signed off ‘formerly Cornet in the Greys, and late Captain-Lieutenant in the Westmorland’.

Lidderdale had resigned his commission in the militia in August 1782, along with a Captain Robertson, and Lieutenants Jackson, Gill, and Dunn. Was Lt Jackson the ‘man of no property’ Lowther disparaged?

Newspapers of the time went into a little more detail. Lowther admitted the regiment had been short of numbers. But he claimed that Jackson’s motive was political.

Of the other petitioners, he claimed Harrison had quarrelled with regiments and employers.

Gill was ‘an insignificant person of around £20 a year, who’d left the regiment because he was slovenly and given to drinking’.

Thompson was of little repute and motivated by ‘spleen’: Lowther was prosecuting a relation of his, on a fraud allegation.

And Lidderdale had “quit the regiment in disgust because he wasn’t allowed to keep a dirty little whore in the same house as the Lady of the Lieutenant Colonel”.

Sir Charles Turner said it was wrong of Lowther to vilify the petitioners. Mr Fox agreed.

And James Martin (MP for Tewkesbury) wondered how, if the petitioners were as bad as described, Lowther had disgraced the regiment so much by giving them commissions!