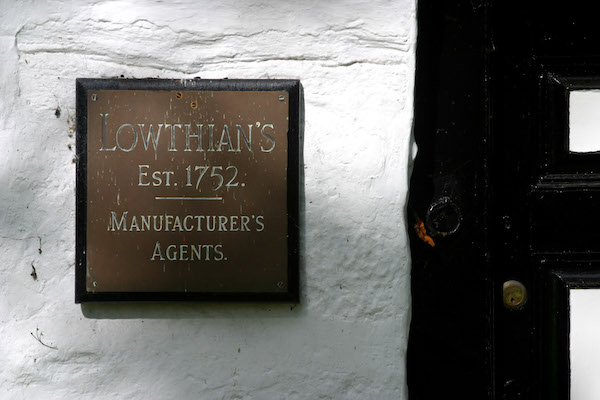 Nathaniel Dean Lowthian may or may not have been responsible for the following advert, but I doubt a firm of Temple Sowerby tailors employed an advertising agency. The advert was in the Penrith Observer and it caught my eye. Partly because I know who the Lowthians were. But also because the wording is, to say the least, unusual!

It ran in the edition of November 11, 1919. And continued to appear until March 1920. Adverts generally aimed to impress readers with the superiority of their product, pitching it as something to aspire to.

Adverts in the vernacular kind of go against that grain.

Joking about having not been killed in the First World War suggests an odd sense of humour. And taste, really, given that this first appeared just a year (exactly) to the end of war. Every person reading it would either still be mourning the lost of a loved one, or sensitive to friends/neighbours who had.

It sent me looking for further Lowthians adverts, to see if there were any more unusual ones.

And it turns out the ‘war’ advert was in perfectly good taste compared to one from a few years earlier!

The firm also combined an usual range of products.

Nathaniel Dean Lowthian and his family

But first, who were the Lowthians?

(There were three other sisters).

Their father Abraham Lowthian (1794-1872) had been a tailor and draper. As had – well, it must have been three previous generations.

The first advert I found exaggerated the timeline somewhat.

Lowthians’ Bicycles. Any colour, any chain, any tyres, any saddle, every speed gear. Come and have a chat about our racers. We can interest you.

Lowthians’ suits. The Lowthians have been tailors for nearly 200 years. We have had a lot of experience with clothes. What you want we have it.

Lowthians’ boots. We are well fit up. You cannot do better from Land’s End to John o’Groats.

They may already have been ‘well fit up,’ but the first advert that stands out is from January 1910, when a General Election was in the offing.

Election or any other time, a blue serge suit is a lot smarter than a yellow. But you can still support the “integrity of the Empire” in a neat Harris Tweed. Try Lowthians for good cloth.

Chamberlain’s policy is to bring about tariff reform. Lowthians’ policy is to sell good boots for little money. You can’t beat Lowthians for leather. Have you ever heard debates about the budget and our leggings?

Lowthians’ bicycles are called Dreadnought. Our 1910 program provides for a big increase. They are not German Dreadnoughts. Support Ye Olde Firme (etc)

From the local nominations (and other) reports, it looks like Abraham Tom Lowthian and Nathaniel Dean Lowthian supported the Conservative Party.

In May 1910, the adverts appealed to farm servants. And included the lines:

…We don’t say we will GIVE you a new suit and a pair of boots with every bicycle, but we do say that every article will be good. That’s why we are so busy. We have got your chum’s order, let us have yours.

We are still busy with London styles at Templesowerby prices.

We have Awl U want in the shoe trade.

And we want U Awl to see our bicycles.

Which they ditched in the summer, to appeal to ‘country gentlemen’ in the shooting season:

Prices 30/- to 35/-/ Dubbin 6d extra. Will cost much more in city. Motorists should call and fill up with petrol and see a sample.

It’s hard now to know what to make of the following, but in 1911, it may have people rolling about laughing:

Lowthians’ Irish Tweed. Caution. When selecting your suit, look for the four-leaved shamrock on the back of the cloth. Not genuine Blarney tweed without it.  A writer says: “That bicycle I got from your firm for £5 16s has the same sort of tyres as my old one that I paid eight guineas for and it runs sweet as a nut.” Are you hunting for a bargain? Why not join the glad throng that goes marching along?

Pushing the boundaries of taste

But while Irish jokes probably seemed hilarious in 1911, this advert from 1912 is in incredibly bad taste!!

1912 April 23.  suits and boots… as for bicycles, well the shop is only small, like our profits. Are you a judge without prejudice?

If so, anchor on Ye Old Firme. There’s no icebergs’.

Not sure a joke comparison to a tragedy in which around 1,500 people perished would go down well today. But they were still running the advert in late May, so it would seem no one complained about the obvious reference to the Titanic disaster of April 14/15.

Off-beat, but in decent taste

The adverts continued at regular intervals.

1913 November. Wrestling in Cumberland and Westmorland style. The Lowthian way catches on. No striking below the belt. Our business methods create business. If there’s no order today, orders spring up like mushrooms tomorrow. The reason is a knotty problem soved by Ye Olde Firme. TS, Appleby and Penrith.

1913. December. Lowthians’ little shop for big orders. The survival of the fittest is the acknowledged maxim of today. Lowthians are in business to grapple with the hard, stern facts of 20th century ideas.

1914 February. Advice for 1914 Stick to Ye olde forme. get a good grip of good cloth, the bulldog tenacity to keep hold is sure to follow.

By that summer, the adverts were saying sunny days had arrived. But of course, in August 14, the shadow of war fell.

Abraham Tom Lowthian, and John Lowthian, were too old to face conscription. But Nathaniel Dean Lowthian got caught, despite his objections.

on the ground of his being the controlling influence in a business with branches in Temple Sowerby, Penrith, Appleby and Warcop.

‘His brother was a tailor but could not manage the business. Application refused, but Mr Lowthian was given two months in which to arrange his affairs, with a possibility of extension, if it could be shown to be absolutely necessary.

Nathaniel Dean Lowthian’s war records survive. At 39 years 6 months, he somehow signed up to the Royal Garrison Artillery in Gosport, Hampshire (but didn’t want to join the Navy), rather than anything more local.

He was 5 feet 8 3/4 inches tall and joined as a gunner, and (luckily for him) it doesn’t seem he got any further than Weymouth, on coastal defence duties.

With both Nathaniel Dean Lowthian and the firm’s Little Dockray, Penrith, shop manager William Hall Stephenson called up, the business had to be scaled back.

The ‘as we did not go to war’ adverts are the first after the peace.

Of war and peace

The consequences of the war on the business can be seen in two subsequent legal hearings.

1921 November. Nathaniel Dean Lowthian and Abraham Tom Lowthian were summonsed for non-payment of of poor and district rates, £4 2s 8d, in respect of a shop on the Sands at Appleby.

The town clerk who prosecuted said they’d refused to pay rates on a lock-up shop which they tenanted. Rateable authorities had been content to write off the rates after Nathaniel was called up during the war, but there was no reason to continue the exemption.

Nathaniel said the shop hadn’t been occupied since he went into the Army in 1915, and hadn’t reopened when he came out 2.5 years ago.

They had been paying rent all that time and intended to reopen it, but hadn’t bothered as the landlord was trying to sell it in the spring.

The signboard was still up, and inside was just as when he’d locked it up in 1916.

The brothers were found liable for rates.

Last of the advertisements

The adverts continue throughout 1922, with less variety than in the past. But they stop in 1925.

1925 February. Nathaniel was in court again, accused of using an unlicensed motor cycle. He was ordered to pay costs after producing his cheque book and a receipt to show he’d sent for a licence.

That November, he won a whist drive prize at Temple Sowerby Nursing Association Carnival. And in the summers, he was playing cricket for Temple Sowerby – in some low-scoring matches! In one example, he scored 5 runs as Temple Sowerby scored a total of 47, to beat Penrith, who only managed 39! Either it was very limited overs, or both teams boasted some first-class bowlers.

In September 1927, Abraham Tom Lowthian and Nathaniel Dean Lowthian, trading as Lowthian Brothers, Temple Sowerby, were charged with failing to pay health insurance contributions for William Hall Stephenson – the branch manager who had clearly also ‘not been killed in France.’ As they had already paid in a cheque for the whole £41 2d 11d arrears, it was adjudged ‘a case of sheer carelessness’. They were ordered to pay court costs.

Nothing shows up then until the end of June 1931:

Death of a Temple Sowerby tradesman. 51 years a chorister.

There passed away in Temple Sowerby on Friday. Mr. Abraham Tom Lowthian, of the firm of Lowthian Bros., outfitters, and one of an old Westmorland family which dates back many generations. He was an outstanding figure in the local village life, having been churchwarden under four Vicars for an unbroken term of 25 years. He was seldom absent from his place in the choir, having been 51 years a chorister. He had a fine tenor voice, and was always willing to give his services in local concerts. He was also chairman of the cricket club, for which he acted as umpire for some years; and as recently as a month ago he managed, though then very ill, to reach the ground to see a match. He was a fine flyy fisher and could spin a yarn and keep his hearers interested In his sporting tales. He had in a glass case at home a large trout weighing 8 lbs. (a record for the river Eden) that fell to his rod. He seldom missed a hunt with the otter hounds or any kind of sport that he could reach in the district. He was unmarried, and though not very well for some time has only been confined to his home for a month.

St James’ Church was filled for the funeral, and the grave had been beautifully lined with evergreens and flowers by Mr L Forrester.

Some 190 years after being founded, with none of the brothers having married, Ye Olde Firme had reached the end of the line.