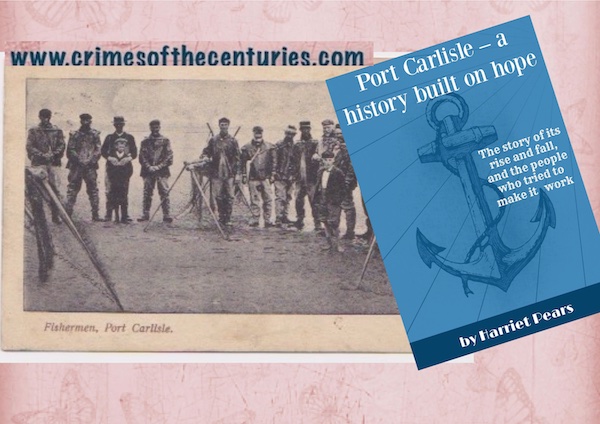 No book on the overall story of Port Carlisle would be complete without a mention of haaf net fishing.

As I write this, it is possible for visitors to have a go, courtesy of the Highland Laddie Inn at Glasson (George Carruthers’ old pub in the middle of the 19th century. His first wife was Mary Peat). After a day in the water, with an experienced guide, the pub chefs will cook you a fish supper.

The following is an extract from my book, Port Carlisle, a history built on hope. You can read more about it in this post.

And you can buy in on Amazon here (search for it on Amazon if you are outside the UK).

Today, conservation (of salmon stocks) is the key concern for the regulators – and concert that rules and limits will wreck haaf net fishing is a perennial one.

In the past, ‘the fisheries’ filled many column inches of local newspapers. Conservation was a big issue then as well. Along with who owned what bits of foreshore, and with it the fishing rights.

And there was a big ‘them and us’ between the big landowners and the ‘ordinary’ folk who lived along the Solway coast.

How you do it For those who don’t know, haaf net fishing is thought to have been introduced by the Vikings around the late 900s – ‘haaf’ being the Viking word for sea, or channel.

Practised for centuries in the North West, including the rivers Lune and Ribble, as was as the tributaries feeding into the Solway, the fishermen’s goal is to catch salmon and sea trout.

The net is supported on a huge rectangular frame  – this differs from similar fishing methods such as lave net fishing in the Severn Estuary, where the frame is Y shaped.

The basic method is for the fisherman to walk out into the water and hold the net upright, facing the incoming or outgoing tide.

The net streams out in the water. Fish swim into the net and are caught.

Haaf nets are not to be confused with stake nets, which only seem to have made their appearance in the Solway from about 1780. Stake nets are erected on wooden poles set in the seabed to form a barrier which directs fish into a large pocket or trap. In 1861, a list of stake nets in the Solway shows three at Bowness which were 100 yards, 150 yards, and 300 yards long. Some on the Scottish side were 800 and 900 yards long.

People were complaining from the 1790s that the stake nets trapped and killed fry and small fish, to the obvious detriment of fish stocks.

Poke nets, meanwhile, are secured to a row of poles set in the seabed and form a series of pockets in which the fish are caught. They pre-date stake nets considerably and seem to have been less controversial that stake nets, even though they ‘inadvertently’ caught salmon out of season. This was possibly because they were an accepted tradition, unlike the ‘modern’ stake nets; possibly because salmon stocks had only suffered after stake nets were introduced. There are also ‘technical’ reasons why they catch fewer fish than stake nets.